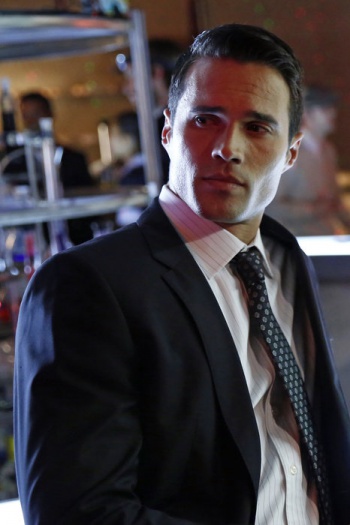 Post-rescue fallout? Seth is dead, Fitz feels guilty and Donnie is shipped off to The Sandbox - but not before discreetly realizing that the explosion has granted him ice powers. And so, we have our second Agents of S.H.I.E.L.D supervillain: Blizzard.

As for final stingers: Coulson reassures May that he trusts her not let her no-strings fling with Ward interfere with work, and reveals that Skye - far from being devastated - is actually pretty glad to learn that she was the opposite of hated by all those foster families. Plus, she's now got like 10 more episodes left in the season to figure out what her crazy-important but undiscovered superpower is. Oh, and Coulson calls up Quinn to let him know that S.H.I.E.L.D is ready and willing to shoot him out of the sky the next time he crosses their jurisdiction (wait - S.H.I.E.L.D respects jurisdictional boundaries now? Since when!?) but he's not concerned... he's working for The Clairvoyant.

Two weeks of re-runs in the near future, but the series will return with a new episode on February 4th which promises an undercover caper on a train, an extended Stan Lee cameo and an "astonishing, series-changing final act" that looks an awful lot like a main character death. It's already been revealed that actor Bill Paxton will be joining the cast as a new (to the team) Agent for a four-episode arc soon after this, likely as part of water-testing for a retooling should they score a second season (it'd be necessitated anyway if Winter Soldier ends with S.H.I.E.L.D.-proper transformed into something sinister) so some deck-clearing wouldn't be the biggest shock in the world. If I was placing bets, my money would be on Ward to buy it, since his original role as fight-scene guy has largely been usurped by May and, speaking of May, losing her secret-sexfriend (and maybe realizing she felt something stronger for him after all) would be strong character stuff to work with.