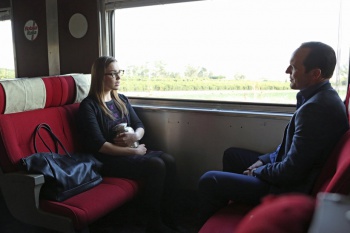 ...several minutes ago, during that same conductor's announcement. Ah. We're doing a "multi-perspective/repeating-action" bit for Act II. Okay, then.

This time it's Ward's Story: Shortly after May nonchalantly hits him with the reveal that Coulson knows "about them," he gets into a knife-fight with the Cybertek goon-squad - indicating that they've been made all along. Arriving back where we left off, he and Coulson speculate over how the blue grenade made the train disappear; grumbling about the possibility that it might've been teleported to Asgard. These moments, i.e. federal agents treating the possibility of a train being blinked off to the homeworld of the Viking Gods as a too-much-paperwork problem, are when this show works. It also almost makes Coulson's decision to not look a gift horse in the mouth when they just "happen" to find a running, hotwired getaway car in the middle of a vineyard almost seem like something a human might do. Also fun: Coulson and Ward can't figure out how to work The Bus's fancy hologram-computers without Fitz/Simmons around. They do manage to make contact with their Italian counterparts, but before their chief can board the plane he's stabbed from behind by a bruised, bloodied May.

...which means we now get May's Story, aka our mandatory "Ming-Na Wen is awesome" sequence for the week: She makes a badass parachute-escape when the train is compromised, landing just in time to see what really happened with the train - it didn't disappear, the grenade was of a type to paralyze Coulson and Ward temporarily without awareness of the passage of time, making it seem as though the train had poofed out of existence. It's also her that hotwired that car, but still managed to get grabbed by... The Italians, who are bad guys. They torture her for information, but this is Agent May so stabbing her in the shoulder is exactly the same thing as handing her a knife to hunt you down and kill you with. More of this, show. More of this.

But NO MORE of this, please: Back on The Bus, Coulson helps May stitch her knife-wound, but from the perspective of a surreptitiously-passing Ward it suddenly looks like he might have some competition. No! Bad! No tiresome love-triangles! That's a bad Agents of S.H.I.E.L.D. Bad!

They find the train abandoned, but with Simmons shell-shocked and Skye and Fitz missing. Time for Their Story: Working tech in the back of the train, Skye tries to pump Fitz for information about human 084's (S.H.I.E.L.D. code for unexplained-objects, i.e. herself) to mixed results. When things hit the fan, they're saved only because Simmons arrives to jump on one of those blue time-freeze grenades. Long story short: "The Package" has been handed off to Quinn, who's taken it back to his Villa. So off they go, and back into regular time the show goes.

Skye, it was earlier noted, has been especially zealous about, um... Agent-ing since learning (part of) her true origins, so she takes the initiative to stealth-shoot her way into the Villa. In the basement is The Package, but also a hyperbaric chamber containing Mike Petersen - whom she does not know is now being remotely-directed by C.E.N.T.I.P.E.D.E and The Clairvoyant. Oh, and also Quinn a moment later, so Skye is kind of screwed no matter what. The Package, incidentally, turns out to be a robotic leg for Mike. You'd have to figure there was a less complicated way to get this to him, but maybe that's what the "C" in "C.E.N.T.I.P.E.D.E" stands for.

The other Agents are taking this opportunity to storm the Villa and rescue Skye (Fitz was somewhat uneffectively standing guard), which might be a problem save that Mike cryptically reveals that his orders/programming explicitly forbid him (at least, for now?) from harming S.H.I.E.L.D. Agents - instead, he's been ordered to slaughter the Cybertek goons who brought the leg. Quinn, however, is under no such orders and shoots Skye in the stomach, twice, at point-blank range.

Um... wow. Did not see that coming. Well, on the bright side, she can cross bulletproof and quick-healing off the "What is my superpower?" list.