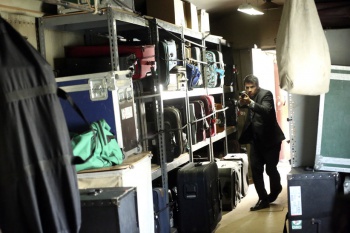 So, the "we might kill a castmember" tease from last time turns out to be more Agents of S.H.I.E.L.D. misdirection - Skye should be dead from that kind of blood loss, but Simmons is able to use Mike's hyperbaric chamber to keep her alive long enough to get her to where S.H.I.E.L.D. super-science can get her stabilized (though still comatose). The ordeal leaves the team visibly shaken, most of all Ward: When May tries to console him about not blaming himself, he glowers that he doesn't - he blames Coulson, presumably for pulling her in the first place.

For the requisite final stinger, Mike is skulking around in public waiting for C.E.N.T.I.P.E.D.E to tell him when he can see his son - somewhat conspicuously for a guy who now looks like Cyborg Freddy-Krueger. A parting zoom-in on the trademark-stamping for the robot leg confirms what the handful of fans who recognized the name "Cybertek" already guessed: Mike Petersen is being transformed into DEATHLOK: THE DEMOLISHER; thus bringing our Agents of S.H.I.E.L.D. supervillain roster to three (Blizzard and Graviton having been previously introduced.)

As mentioned, we're on break again until March 4th. It's pretty clear that Skye isn't going to die - she and Coulson are more-or-less the joint main characters (of this season, if not of the series.) Previews for the next new episodes are teasing a hunt for a cure for Skye storyline; and since "two bullets in the stomach" isn't really something you "cure" one imagines that could take up an episode or two, probably built around temporary new guest star Bill Paxton. Will near-death kick-start whatever he supposed special-powers are? Who knows - that feels like something you'd save for a season finale.

Also: Episode 15 is already being promoted to feature a guest spot from Jamie Alexander as the Thor franchise's Lady Sif, supposedly hitting Midgard to deal with perennial Asgardian villain Lorelei. Obviously, Asgardian-heritage is one of the plausible answers to Skye's origins, but I hope it's something more unexpected than that.