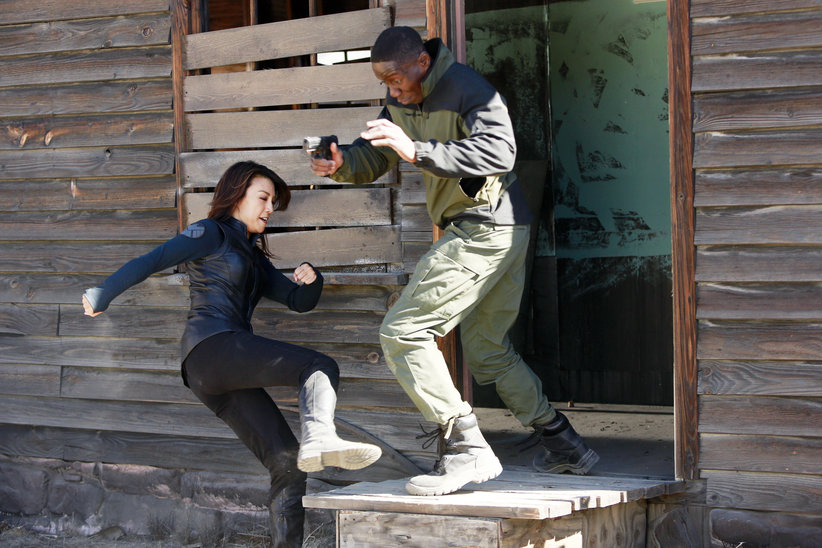 There's no two ways about it: This was the big, anticipated "Here's what happened to Coulson" reveal... and it was a letdown, somewhat in execution (it's not one of the better episodes, really) but definitely in terms of the basic rule of mystery-writing that the truth has to be more interesting than the red herrings. I almost wonder if they'd already figured out awhile back that the (presumably early-decided) outcome wasn't going to go over well and opted to minimize the backlash: In flashbacks to Coulson's make-not-dead-anymore surgeries, we see him doing his best Johnny Got His Gun, but with a repeated plea of "Let me die..." instead of "Kill me." The phrasing is oddly specific, and I wonder if we were at one point meant to see a redacted quote of this ("L__ M_ D__") as one last bit of misdirection to make us think that the Robot Theory was true, and that perhaps they decided to nix that because fans would likely have been even more ticked off. It's not a terrible episode, in the end, but there's no denying that it did more than anything to cement "We thought _____ was going to be a cool thing from the comics and instead it was ____" as a reigning narrative for the show's place in fandom chatter. From this point forward, if "AGENTS OF S.H.I.E.L.D." is to succeed, it will be because it either bounced back from or found a way to transcend having hyped-up a (self-created) loose end from "THE AVENGERS" and failing to stick the landing.

This is the best episode of the entire series up to now. The setting (S.H.I.E.L.D's version of Hogwarts for school-aged Agent prospects) is interesting, the backdoor-origin for another Marvel supervillain (Donald Gill, aka Blizzard) plays out well, the FX sequences are impressive, the new status quo (Coulson is mad at S.H.I.E.L.D.-proper for lying to him and wants to start breaking the rules) and the B-story (Coulson and May running down Skye's still-hidden backstory) is compelling as hell. For a change, one of the series' "big reveals" actually was a big, show-changing reveal: Skye is a human "0-8-4," an undocumented/unknown (even to herself) superhuman who was protected in secret by S.H.I.E.L.D. Agents as a baby. If they can keep hitting this level of quality, the show has a real shot. 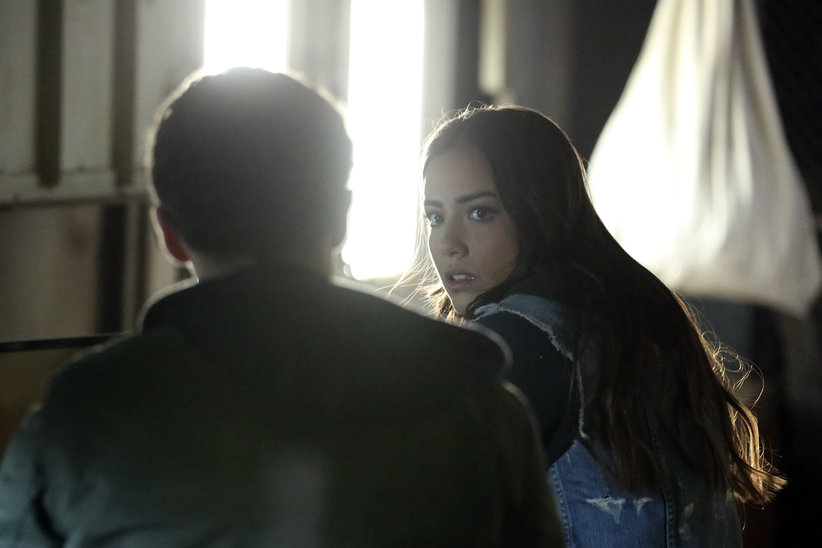 This was the most recent episode, so a summary feels less necessary. Ian Quinn is officially simpatico with C.E.N.T.I.P.E.D.E., who has also rebuilt Mike Peterson into "Deathlok" and Skye's yet-untapped super powers evidently do not include being bulletproof - leaving her mortally wounded with saving her from death teased as the new mission for when the series returns in March. It's a good episode, with good signs of a series finding proper/permanent footing now that the mission has changed from "live off The Avengers table scraps" to "set the pins for Captain America 2."

Thus far, only the titles and details of two forthcoming episodes have been revealed: EPISODE 14: "TAHITI" will find The Agents going rogue to break into S.H.I.E.L.D.'s upper-echelons (a folder marked "Clearance Level 10" is seen in promos) looking for a way to heal Skye's injuries from the previous adventure - likely on the assumption that if Coulson can come back so can she. This will also mark the debut of Bill Paxton, joining the series for a four-episode stint as a former superior of Agent Ward. After that is EPISODE 15: "YES MEN," in which the team will encounter Thor comics nemesis Lorelei (model/actress Elena Satine) and Thor movie sidekick Lady Sif (Jamie Alexander). In the comics, Lorelei's main gimmick is magical-seduction of any man, so this is probably a "girls have to save the boys" storyline - that should be fun.