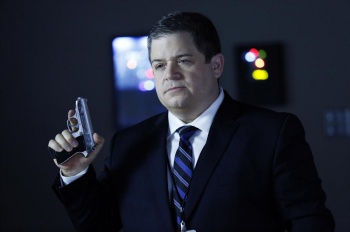 Remember when a random escapee got a closeup during the prison-break in last week's episode? Well, he's a featured player from scene one this time, revealing that his power is to draw electrical energy out of his surroundings and his name is Marcus Daniels. So, Blackout joins Agents' roster of Marvel supervillains who appear in plainclothes because (supposedly) ABC TV feels differently about comic-book costuming than Disney does. Oh, well.

Back at the secret base, Ward tells the team about the breakout at The Fridge, except in this version he killed Garrett and got away to warn them. Coulson is especially interested to know whether Marcus Daniels was among the escapees. Since Ward let himself get beat up pretty good to make the ruse convincing and he still doesn't trust May, Coulson asks Triplett to join him and Fitz/Simmons on running down liberated Fridge residents, starting with (the guy they never actually call) Blackout. Just one problem: Koenig was under orders from Fury to protect Coulson and what's left of S.H.I.E.L.D. at all costs, and he's not letting anyone out of his sights until they pass "orientation" - i.e. a high-tech lie-detector specially commissioned by Fury to be so precise even Black Widow couldn't beat it (though it seems to be an open question as to whether she still could/did.)

So, it's time to do S.H.I.E.L.D.'s version of the Voight-Kampff Test, which turns out to be a way to cram a whole episode's worth of fanservice into about a minute of screentime. Prompted by Koenig, the characters reveal Marvel Universe tie-ins (Triplett is the grandson of Gabriel Jones, one of Captain America's personally-chosen Howling Commandos) expanded backstories (Melinda May was married!) inter-cast crushes (Fitz's answer to a "desert island" question: "Simmons." Aww) and straight-up appeals for Tumblr/io9 ink (Simmons' answer: "The TARDIS.") Oh, and Skye's real name, at least the one given to her at the orphanage, turns out to be Mary Sue Poots. Ha. Ha.

Ward, of course, has the hardest time with the test: At one point, Koenig just trains a gun on him and demands to know straight-up if he's HYDRA or S.H.I.E.L.D. Ward's way around the machine? Making it seem like the "other agenda" Koenig detects him having is his protective crush on Skye rather than his being HYDRA. Also, it looks like he did the "needle in the thumb" trick (supposedly you can beat a lie detector by covertly inflicting pain on yourself during the process) but either way it works. He, Skye, May and Koenig will hang back at the base to run threat assessments on next season's monsters of the week, the escaped Fridge inmates while Coulson, Triplett, Simmons and Fitz (who's visibly annoyed at how fond Triplett and Simmons obviously are of each other - uh-oh...) go after Blackout.

Why is Blackout so damn important for Coulson? Turns out they first captured him when he was just the super powered (laboratory accident involving an energy source called "Dark Force") stalker of a Portland cellist - as in "The Cellist", Coulson's previously unseen former girlfriend first mentioned in The Avengers. Her name is Audrey Nathan (Amy Acker has the part) and The Agents get to her just as Blackout makes his appearance. Simmons and Triplett usher her into an SUV claiming to be CIA while Coulson and Fitz show up moments later to try taking the bad guy down with light beams (apparently his weakness) mounted on Fitz's minidrones. Unfortunately for them, the "S.H.I.E.L.D. was bad at being S.H.I.E.L.D." theme continues: The Agency didn't try to cure Daniels while he was in custody - they made him stronger. Strong enough to blast the Agents with Dark Force energy and escape.