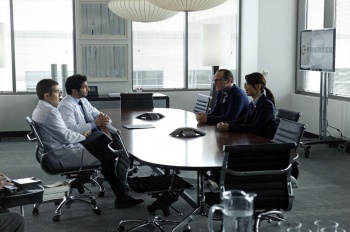 NOTE: As we've mentioned previously, it is no longer feasible to discuss Marvel's Agents Of S.H.I.E.L.D. without also discussing spoilers for Marvel's Captain America: The Winter Soldier. Read on at your own risk (especially since I'm also going to spoil the episode itself.)

"Get ready for a large file transfer!" -- Agent Coulson, to his on-staff tech support on the ground, before pushing an entire file cabinet out of an office building window.

So where were we?

Agents of S.H.I.E.L.D. has been following a fairly rigid structure ever since it stepped into its post-Winter Soldier cleanup mode. Each episode gets a character-driven B-Story ("Skye has been kidnapped," "Coulson and May are mad at eachother,") to provide a traditional three-act structure so that the "Let's get HYDRA!" A-Story can segment out across episodes without necessarily needing a proper start or finish. That separation is more profound this time, as the B-Story takes the form of flashbacks wherein we learn how Garrett found, acquired and trained Ward.

As we open, its 15 years ago and Young Ward has been locked up for attempting to kill his (previously established) evil older brother via arson. Garrett shows up to benignly bully him into joining "a secret organization," (because double-meanings, y'see) and he readily agrees.


In the present, Skye explains to The Agents that she left a computer virus in the data she was forced to hand over to Ward, but they now need to find a HYDRA-connected computer in order to upload it. The plan? Break into Cybertek and try to do it from there, since they seem to be pretty deeply enmeshed with the bad guys already. Since Winter Soldier ended with Black Widow having dumped all of S.H.I.E.L.D./HYDRA's secrets onto the internet I'm not sure why this company wouldn't already have been turned inside-out by the government, but whatever - this is all an excuse to get us asking "What will they use for Secret Agent gear now that The Agency is gone and Garret stole The Bus?"


Answer: Agent Trip has a trunk full of his grandfather's old Howling Commando gear! This is fun stuff - a chance for the show (and, in-universe, for Coulson) to nerd out over old fashioned spycraft tools in the "things that look like other things" mold and to load Chekhov's Gun via Fitz finding an EMP-generator disguised as a joy-buzzer. (Do they still make those? Will anyone under 20 get this gag?)

Meanwhile, up on The Bus, Ward and Garrett give Deathlok a hard time over a news report about an assassination he was ordered to carry out on a Columbian druglord for reasons not yet clear. Back in flashback-land, step one in Ward's training/indoctrination is Garrett leaving him stranded in the wilderness for several months to force him to learn survival the hard way. To keep him company, Garrett leaves a hunting dog named Buddy - which is of course Red Flag City if you're an animal lover familiar with certain strains of gang/cult indoctrination-hazing.

Next up is our comedy showcase, with Coulson and May pretending to be ex-S.H.I.E.L.D. scientist applying for work at Cybertek with Fitz/Simmons feeding them science-speak via earpieces (since the actual scientists probably couldn't fight their way out of the place.) Cute bit. Unfortunately, they won't be able to locate any HYDRA computer uplinks - turns out Cybertek/CENTIPEDE does cyber-security the old fashioned way: By only storing the really important/illegal stuff on paper in old-school filing cabinets. Well, that explains the secure vault with two guys analyzing a chalk equations with typewriters back in Episode 4. They do manage to steal a cabinet (see opening quote) containing some fairly pertinent information: Cybertek has been in the cyborg soldier business since at least the 90s, and Deathlok Patient Zero was Garrett.

Garrett and Ward hop back to Cuba to touch base with Ian Quinn (CENTIPEDE's "legitimate businessman" public face) and Raina in their secret base, where she's hard at work synthesizing GH-325. In an expository conversation (is there any other kind on this series?) with Ward she reveals that she is not controlled via eye-implant explosive like other CENTIPEDE loyalists, but stays on because she has a scientific interest in people with "something special inside". (Mutants? Or whatever the Marvel Cinematic Universe version of Mutants is going to be since they can't say that word because Fox still owns the X-Men franchise?) On that note, she's still pissed off about Garrett not actually be a clairvoyant... oh, and she wants to meet Skye - they might have something "in common." Hm?

Back in the flashbacks, Garrett tells no-longer-young Ward the story behind the metal plate on his side we glimpsed an episode or two back which we can now be reasonably sure is part of his Deathlok-hood. As he tells it, he was wounded in an operation and S.H.I.E.L.D. neglected to rescue him, hence his change in loyalties to HYDRA. In the present, he suffers an implants-related minor seizure and confides to Ward that he's actually gravely ill - in fact, that's the real reason behind everything that's happened so far: He's dying of major organ failure.