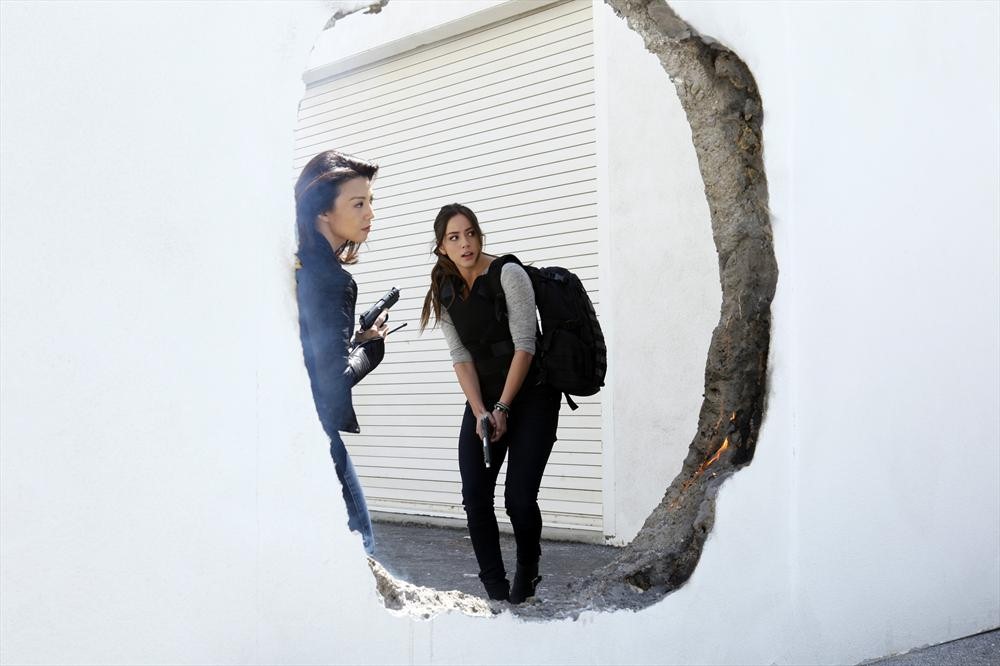 Now Quinn is at Cybertek, showing off an almost quaintly low-rent Deathlok-making machine to a bunch of Pentagon brass - it's basically a dentist's chair that snaps robot parts onto you. (I have a game where I try to decide which charmingly dopey 90s syndication genre show Agents reminds me of most each week. This week's winner: Acapulco H.E.A.T.) Outside, Coulson and Tripp (the chemistry BJ Britt has with Clark Gregg has been a great surprise) steal an armored vehicle and start blasting the crap out of the place so Skye and May can sneak in. Solid action scene, even if it does appear that our big Final Conflict really is going to play out in and around what looks like any random Southern California industrial park property - much as I'd like them to have a better budget, I almost hope this show never stops looking like a mid-80s Canon Films release. The military guys are concerned, but Garrett arrives to reassure them by ripping out a guy's rib and stabbing him to death with it.

Raina tells Ward (who's having second thoughts about the whole "Garrett is The Highland thing) that he needs to fetch Skye; who just took the Cybertek floor manager guy hostage. He activates "default mode" on the CENTIPEDE soldiers, but that's what they wanted: "Default" is "Protect Garrett;" so now Coulson can just follow them to the prize. Alright, that's cool. Garrett gets a taunting phonecall from Skye, but taunts her right back about Fitz/Simmons and reiterates for Ward to go get her. He also casually points out that Deathlok hasn't left his side all day, which may as well come with a subtitle asking us to remember that for later...

Speaking of stuff you already saw coming, Fitz/Simmons escape plan will work... but there's only an emergency one-breath air-tank for one of them, and Fitz has decided its Simmons who gets to live because he can't go on without her. Tears, kisses, blow the hatch, Simmons and Fitz's lifeless-looking body burst to the surface just in time for her to be rescued by NICK FURY, who swoops down in a helicopter to close out what was, all joking aside, as good a "serious" scene as the show has had all season. As it turns out: Fury had followed Fitz's beacon to them, but while Simmons will just need some time in decompression, Fitz is alive but in very bad shape...

Back at Cybertek, Skye wants to know if the middle manager is a HYDRA loyalist or part of the "Incentives Program," a term that's come up a few times throughout the episode. Before he can answer, Ward shows up to taunt her and (I'm pretty sure) more or less threatens to rape her, which is... wow. Okay, guys, I know you want to make sure everyone "gets" that Ward is all-the-way bad now, but geez. I'm pretty sure even Tumblr is over "SkyWard" by now. But whatever: Turns out May gets the honors of "killing" Ward, jumping him offscreen for an everything-not-nailed-down brawl that stretches over the next few scenes in pieces and is easily the best fight scene of the whole series so far, ending with Ward knocked out after having his foot nail-gunned to the floor. 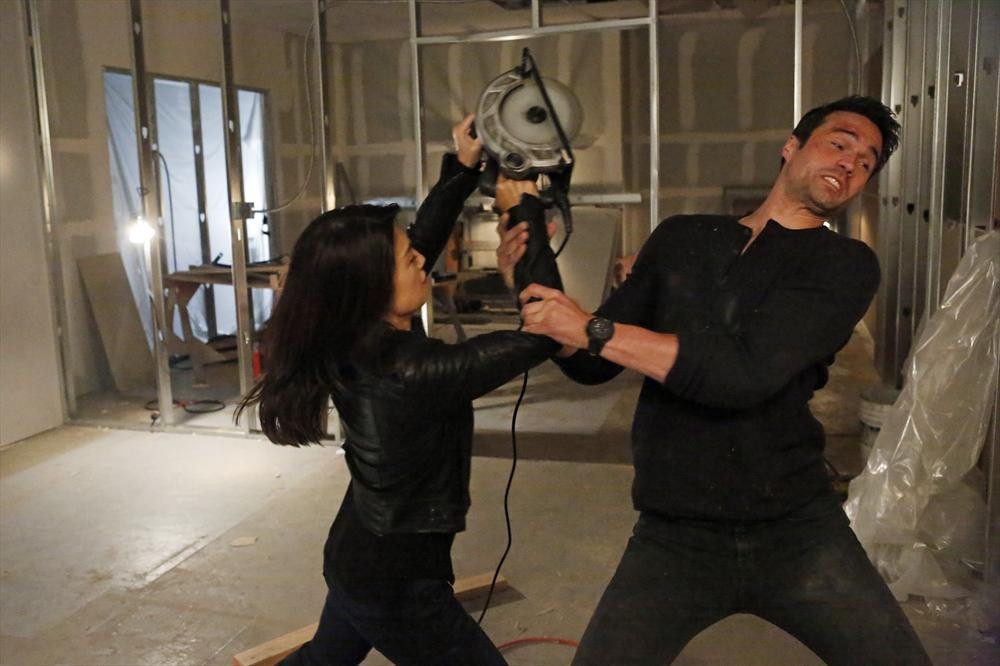 Meanwhile: Coulson shows up in the... basement(?) to fight Garrett, not realizing his enemy is now a superhuman. Fortunately, when Garrett punches him across the room, he lands next to some backup: Nick Fury, which doesn't make the barest sliver of logistical sense but who cares because May is beating a guy to death with power-tools in the adjacent scene and now Sam Jackson is here and everything is awesome right now!!! Fury gifts Coulson with The Destroyer Gun from The Avengers (okay, now they're just showing off...) which of course has exactly enough ammo to take out Garrett's CENTIPEDE henchmen but not Garrett himself.

Garrett gets in some ranting about one of Fury's old speeches (the gag: He actually misheard it) while Skye makes middle manager guy show her what The Incentives Program is: Kidnapped relatives of people being forced to work for Cybertek. Middle manager guy gets his girlfriend(?) back, and Skye rescues Mike/Deathlok's son Ace - allowing her to reveal (in case you hadn't already guessed) that her "eyes on Garrett" was actually Mike's eye-camera, which she's hacked and has been communicating with this whole episode. With Ace's safety confirmed, Mike turns his weapons on Garrett, presumably killing him.

And so, it's wrap-up time: Ward is alive, but he's so badly-beaten he can't talk. Fitz "may never be the same again," and Coulson/May are planning to make sure his (Ward's) interrogation for HYDRA info is extra painful for it. Ace goes back to his mom, but Deathlok won't join them - he's ashamed of what HYDRA made him do, and he's off to walk the earth redeeming himself (read: see you randomly throughout Season 2, Mike!)