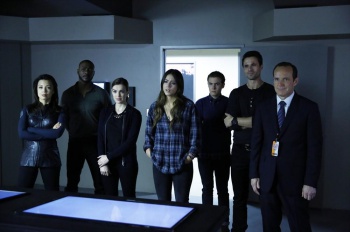 LOCATION, LOCATION, LOCATION
TV shows tend to look cheap in their first season. Don't believe me? Find a first-season episode of Law & Order: SVU or NCIS and look how half-formed the sets, costumes and makeups all look. Agents has the added problem of its characters having to supposedly turn up all over the world without actually having the budget to go all over the world. And while the producers and location managers struggled mightily in season one... too much of the series still seemed to take place in the same Southern California industrial park.

A lot of this is a problem of budget, but other shows have done more with less. Lighting and shooting for scale are something of a lost art in TV production these days, but not completely - look how much mileage CSI: Miami got out of orange color-keying. the agents don't necessarily need to go bopping off to Mars or hanging out with Namor in Atlantis, but it'd be an improvement if Evil Villain HQ's supposedly on two different sides of the planet didn't appear to have been built as part of the same Valley strip-mall.

DO MORE MARVEL STUFF
Just to be clear: I think the "Where are all the cameos!!!!????" backlash on this series is way overblown. Remember when Smallville had been on long enough that the DC back-catalogue had become "cool" again and people like Hawkman and Stargirl started showing up? Yeah. The show didn't get any better - it was still Smallville, now with elaborate cosplay. I enjoy checking obscure comic book characters off my Stuff I Never Thought I'd See In Live Action list as much as anyone, but the bad episodes of Agents of S.H.I.E.L.D. would not have been suddenly made "good" just by dropping Night-Thrasher or ROM the Spaceknight into the middle of them.

But... there are a lot of good assets in the Marvel canon, and this series might as well make use of them. Forget the cameos, there's more than enough super-technology and evil organizations floating around the margins of the universe to not have to build a whole episode around the chilling villainy of "Ghost Person with Wrench." 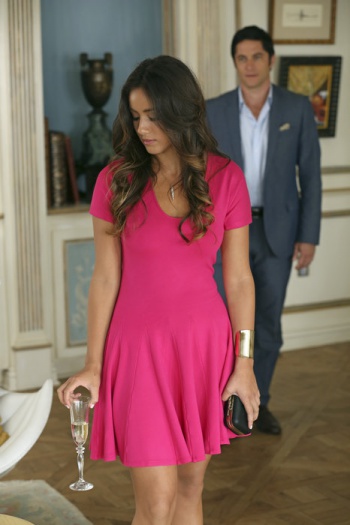 PUT AT LEAST ONE RUNNING MYSTERY COMPLETELY TO BED
Agent Coulson was Frankenstein'd back to life by chemicals extracted from what is probably an alien and the experience may have given his mind access to higher functions that he may not be fully in control of and may not be entirely beneficial. Agent Skye is actually the child of a pair of unregistered nonhuman super-beings described as "monsters." These two mystery arcs are probably connected and have been running concurrently since the first episode in one way or another.

They need to bring at least one of these to some kind of conclusion, so the show can have something resembling a solid basis. That's not to say either of them have to stop developing as characters, but one or both of them need to turn a corner and start a new arc. Mysteries within mysteries are all well and good, but if you stretch it out too long people get annoyed.

Meanwhile...
Another thing that changes next year is that Agents will not be the only Marvel series running on ABC. Agent Carter, a period drama set in the post-WWII era involving Captain America: The First Avenger's Peggy Carter and the birth of S.H.I.E.L.D. itself, will be joining it in a yet-to-be-announced capacity, though it's widely believed that Carter will be run as a special event instead of reruns when Agents takes its mid-season break.

What will that be like? What do we want to see out of Agent Carter? Next week, we'll look into that...