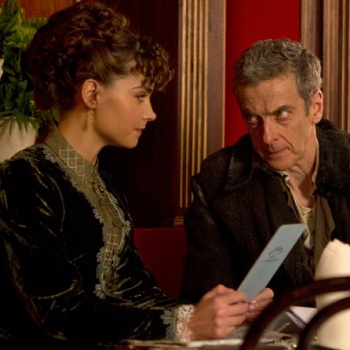 A New Dynamic
This episode isn't just a change in the Doctor: the dynamic between the Doctor and Clara is different, too. Clara's always seemed like a bit of a cardboard cutout to me. Her character is a lot like the previous companion, Amy Pond, and very little has been done to flesh her out into a unique individual. In fact, she feels a lot like a classic Who companion -- and an early one at that -- with little character motivation beyond helping the Doctor out of whatever situation he'd landed himself in this week.

But Clara in Deep Breath feels a lot more real than she has in the past. She's frustrated at the Doctor's sudden change and wants the old one back, acting as a surrogate for many Matt Smith-loving viewers. But she's voicing that frustration in a way that makes her seem awfully shallow, like she was only following the Doctor around for his looks. When Vastra calls her on it, she gets angry, proclaiming "I've never had the slightest interest in pretty young men." It has something of the lady doth protest too much to it, but it's also a lot more spark than we usually see from Clara and it brings a lot of life to the character.

Her dynamic with Capaldi's Doctor is more "old married couple" than "boyfriend and girlfriend," as the two of them seem to do little but bicker when they're in the same room together. The Doctor insists she's a control freak -- something we haven't exactly seen from the character in the past, but Clara protests it in a way that certainly makes it seem probable. Again, this is a sudden turn for Clara, but she seems more interesting for having these flaws and sanding up for herself despite them.

Her finest moment this episode -- and perhaps her entire run to date -- comes when the Doctor has apparently abandoned her to the villain of the week. She doesn't know this new Doctor yet, and neither Clara nor the viewers can be entirely sure whether he'll be in time to save her. As she's threatened with torture and death, she breaks down, crying, but never backs down or gives up on trying to talk her way out of the situation. Finally, she says that if the Doctor is still the Doctor, he'll have her back -- and she holds a trembling hand out behind her in hopes he takes it. He does, but there's a moment of doubt that you really feel in the meanwhile. Standing up to the bad guys when she knows the Doctor will always be there to help her is one thing, but standing up to the bad guys when she's alone and without hope of rescue is something else entirely -- and shows a heck of a lot of strength and determination from Clara. It's a great moment.