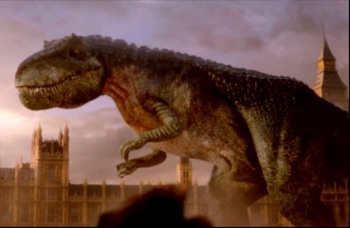 Meet the MacGuffin
The dinosaur we're introduced at the opening of the episode is actually only a MacGuffin to lead us to the larger plot. The Doctor has awoken from a post-regenerative nap to rush to the rooftop of the Paternoster household to have a chat with the dinosaur when it suddenly burst into flames. ("No! Don't do that!") The Doctor blames himself for the creature's death, saying "She was scared and alone. I brought her here. Look what I did."

However, at least the Doctor is invested in this new puzzle, which is a step up from his recent confusion. He asks whether any similar deaths have happened recently, which is how we find out that there's a spontaneous combustion trend going on in London now, which Vastra speculates is intended to destroy some kind of evidence in the bodies -- an apt point, since the villains of the episode turn out to be organ thieves.

We've already seen a partially clockwork man steal a human's eyes -- and that same clockwork man is walking away from the burning dinosaur without so much as looking its way. So we've clearly found our villain, but as he loses himself in the crowd, our investigators are stuck at square one on this odd case.

Again, it's Clara who pushes the story forward, finding an advertisement in the paper directed at the "impossible girl," which she decides is a cryptic clue from the Doctor -- who's run off to investigate on his own. But when she meets the Doctor at a restaurant, it turns out he hasn't placed the ad -- but by the time they realize that neither of them has placed the ad, they're in trouble. The entire room is full of none-too-friendly clockwork people who prevent them from leaving, lock them into their seats, and send them down to their leader to have their organs harvested. ("You've got to admire their efficiency," the Doctor comments.) They escape from their bonds with the help of the sonic screwdriver (after some bickering in which the Doctor complains about missing Amy), but the Doctor lingers in the room with the androids, wondering why it seems familiar -- and when Clara comes to push him through the door, she winds up stuck behind when the door slams closed.