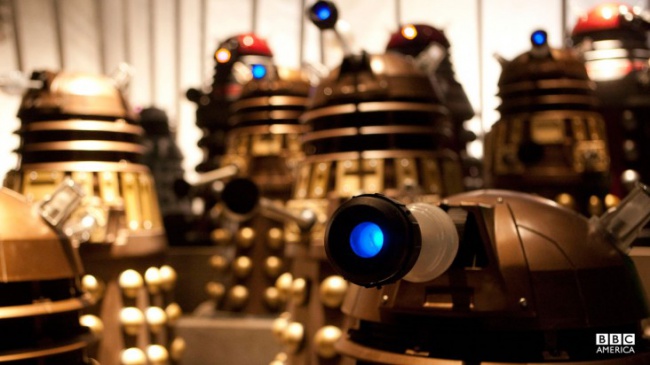 The following article contains spoilers for Asylum of the Daleks.

So with that, let's head off to The Asylum of the Daleks!

The Doctor, Amy, and Rory are separately ambushed and kidnapped by Daleks disguised as humans and brought before the Dalek Parliament. Looks pretty grim, but the Daleks actually want the Doctor's help destroying The Asylum, a dumping ground for insane and otherwise broken Daleks. The Daleks have more than enough fire power to blast The Asylum to smithereens, but the planet is surrounded by a force field and they're too chicken to nip on down and shut if off themselves. They force the Doctor - and his companions, because it is known that the Doctor needs companions, duh - to beam down to the surface and do their dirty work.

Asking their enemy for help seems like an odd thing to do, but of all the Doctor's enemies, the Daleks are perhaps the best at recognizing when they need a bit of help. In The Destiny of the Daleks (1979), the war between the Daleks and the android Movellans had come to a standstill, because neither army's ultra-logical minds could outplan the other. The Daleks sought out their creator, Davros, in the hopes his flawed, human mind could give them a leg up on their enemy by adding an aspect of unpredictability to their strategies. We most recently saw Davros in The Stolen Earth and Journey's End (2008), where he was accused of betraying the Daleks because if there's one constant in the Whoniverse, it's that Davros' arrogant assertions that he's amazingtown don't mesh well with the Daleks' inability to appreciate nuance. (Their confrontations tend to run to "Well, if you're so super, why can't you do X?" an awful lot.)

Before beaming down to the planet, the Doctor, Amy, and Rory are questioning the Daleks about the situation and Rory asks, "What color are they?", defending his choice of inquiry by saying all the good questions were already taken. It's a cute line that not only illustrates Rory's position in the TARDIS pecking order but also alludes to Victory of the Daleks (2010), in which five new "pure" Daleks are revealed, each with a different color and purpose. Daleks have been differentiated by color before, but the color palette always stuck to the grey/silver/black range, as opposed to the bright hues of the new design. The change wasn't overly well-received from fans or critics, because, really, a bright orange Dalek just isn't all that scary. It's hard to be terrified of a cheerfully blue salt shaker, even if it is shrieking "Exterminate!" at you.

The Doctor, Amy, and Rory beam down to the surface, but Rory finds himself separated from his companions. He beams directly into the Asylum itself, where he receives help from the perky, yet oh-so-brilliant Oswin, whose ship crash landed a year ago. In case Oswin looks familiar, it's because she's played by Jenna-Louise Coleman, who's been announced as the next companion when Amy and Rory leave. Does that mean Oswin will, in some way, return? Or does it simply mean that she did such a good job in this episode that they decided to hire her on for more? I hope it's the former but figure it's the latter.

Oswin is that most rare of characters on Doctor Who - one who can not only keep up with the Doctor, but actually surpass him in some ways. The Doctor may not always be in control of a given situation, but he's typically the smartest one in the room. He knows just about everything about just about everything, and his power comes from the ability to adapt that knowledge to the situation at hand. Yet Oswin manages to change the dynamic of their relationship, using her genius to lead him through the Asylum, rescuing him at the last moment as he's literally screaming for help outside her door as Daleks from previous encounters (including Death to the Daleks (1974), Planet of the Daleks (1973), and Power of the Daleks (1966)) have him pinned.

Unfortunately, Oswin is actually a Dalek herself. She really did crash land on The Asylum a year ago, but was captured by the Daleks who, upon recognizing her genuine brilliance, did a full conversion on her and made her into one of them. Her mind rejected that reality and replaced it with her own - one in which she was safely holed up, awaiting rescue by baking soufflés.

Our first clue that something may be up with Oswin is a rather innocuous question posed by The Doctor - where was she getting the milk for the soufflés? The Doctor is pretty smart about not showing his hand too soon, but simply can't resist showing off that he knows that something's going on. He's quite fond of throwing out these seeming non sequiturs, like in The Beast Below (2010) when he mentions the glass of water resting on the floor (which indicated that the massive ship had no engines), or Liz's mask (which was ancient, yet fit her young face perfectly), so be on the lookout for them in future episodes.

We learn that Amy and Rory have been having problems and are in the midst of filing the paperwork for divorce. Ordinarily, that wouldn't be relevant during an escape from a planet full of insane death machines, but one of The Asylum's most brilliant defenses is the nano-cloud, a swarm of molecule-sized machines that will slowly Dalekify you unless you wear a special bracelet ... which naturally Amy loses within moments of hitting the planet's surface. Rory wants to give Amy his bracelet; he figures the transformation process will take longer on him. Because, let's face it, he always loved Amy more than she loved him back. When he offers "two thousand years sitting outside a box" as proof, he's referring to events in The Pandorica Opens and The Big Bang (2010 for both), in which Amy is locked inside The Pandorica - a box designed to be the Doctor's prison - and Rory keeps guard until the box can be opened some 2000 years later. Explaining how Rory could hang about for a couple of millennia would require recapping almost the entire season, but to sum up: He had all of Rory's feelings and memories, but was actually a plastic construct known as an Auton, and therefore didn't age a day the entire time he waited.

It wasn't Amy's lack of love for Rory that ended the marriage, we learn, but rather her inability to bear any more children. We discover in A Good Man Goes to War (2011) that Amy was very pregnant, about to give birth, and being held captive on Demon's Run. Whatever they did to her there, she says, left her unable to have any more kids. Given that the one child she did have was taken away, trained to kill the Doctor and grew up to be River Song (as we discover in Let's Kill Hitler (2011)), it may be just as well. With a clear understanding that they've both been very silly, Amy and Rory make up, hurrah, and they escape the planet with the Doctor just as Oswin lowers the force field and the Dalek Parliament ship blows everything to bits.

Before she pulled the plug, Oswin did the Doctor a solid by erasing him from the Dalek hive mind, deleting their long, antagonistic history with him. This not only creates a completely new dynamic for the show (which is good, because it was getting a wee bit stale), but also setting up the unfortunate "Doctor who?" line at the end of the episode. Yeah, it echoes the end of The Wedding of River Song (2011) in which "Doctor who?" is revealed as "The first question. The question that must never be answered. The question that" the Doctor has been running from his entire life ... but it's dumb. Yeah, it's a play on the show's title, har, har. It was stupid last season and it's stupid now. I hope they drop that particular shtick soon.

So that's a bit of the extended Whoniverse for this episode, but it's by no means exhaustive. Hardcore Whovians, feel free to add your knowledge by posting in the comments; Newvians, if you have questions, this is the place to ask! The goal here is, to borrow a quote from another favorite sci fi series of mine, to Share and Enjoy.

We'll meet here again next week to go over Dinosaurs on a Spaceship!