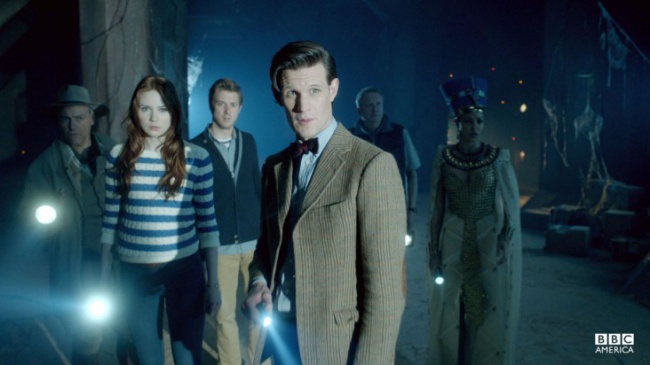 Do you need to know any of this to enjoy the new season of Doctor Who? Nah, not at all. And given that New Who has rendered much of ClassicWho moot, you can shrug off almost everything pre-2005 if you want. But it's fun to explore the roots of a fiction with so much history, and knowing a bit more about the olden days may just entice a few of you to check out the the pre-Eccleston Doctors.

So with that, let's head off to Dinosaurs on a Spaceship!
First off, let me talk about the brilliant simplicity of that title. Everything you need to know in four words. There will be dinosaurs. In space. In terms of sheer anachronistic coolness, it's on par with the space-faring Spitfires featured in Victory of the Daleks (2010), though in context the dinosaurs make marginally more sense. Marginally.

The Doctor is called in because a spaceship the size of Canada is due to collide with Earth in approximately six hours. All attempts to contact anyone on board have failed, so if he can't divert its path, there's going to be a rather large kaboom. He rounds up a gang (because he figures he might need one), picking up mighty hunter John Riddell, Egyptian Queen Nefertiti, and the Ponds. He accidentally scoops up Rory's dad at the same time, though, which leads to one of the most charming guest companions ever to grace the TARDIS. Rory's dad Brian - who you may recognize as Mr. Weasley from the Harry Potter films - is such a dad. When we meet him, he's up a ladder, convinced that the light fixture in Rory's living room is broken, despite Rory's assurance that the bulb is just burnt out. Because he is the parent, and therefore clearly knows best, despite the fact that Rory is a perfectly capable grown man. We've all been there.

Gang assembled, the Doctor lands on the enormous spaceship which oddly not only has its fair share of spiders but also an unusual amount of greenery. There are also honest-to-god dinosaurs roaming around. The ship is shockingly tidy for being full of non-diapered dinos, but perhaps there's a space-age way of dealing with ankylosaurus poo. After a bit of poking around, which accidentally separates Rory, Brian and the Doctor from Amy, Nefertiti and Riddell, the team learns that they're aboard a Silurian ship with some pretty amazing specs. The engine room is an indoor ocean, harnessing the power of the waves as they wash up on the beach. It also has pterodactyls that try to eat the Doctor Rory, Rory's dad, and Rory's dad's trowel - because what kind of man doesn't have a trowel with him? Amy discovers the ship is an ark designed to transport a smattering of dinosaurs and plantlife to a new planet, currently on a path back to its point of origin - Earth.

Let's pause here for a moment and talk about the Silurians, aka Homo reptilia. They're not as well known as other Doctor Who enemies, and unlike other returning villains, they're not trying to rule the universe. Mostly, they just want to be left the hell alone, and only make their presence known when humans start mucking around where they probably shouldn't. In The Hungry Earth (2012), an expedition to drill further than humans have ever drilled before gets a bit too close to the Silurian civilization that'd been underground for about three million years, but that wasn't the first time we'd blundered into them in our quest for scientific progress. Hibernating Silurians were the cause of a power drain at a nuclear research center in Doctor Who and the Silurians (1970), and Silurians teamed up with their "cousins," the Sea Devils, against the humans on an underwater sea base in Warriors of the Deep (1984). The pattern is pretty consistent - they're hanging out, minding their own business, we encroach on their territory and they get all feisty and start killing us. You can see their point, really. I mean, we are the interlopers as far as they're concerned.

Not all Silurians hate humans on sight, though. Silurian warrior Madame Vastra comes to the Doctor's aid in A Good Man Goes to War (2011) and in Cold Blood (2012), the Doctor successfully appeals to the more reasonable Silurian leaders, persuading them not to wipe humanity from the Earth's surface. (This is also the episode in which Rory dies and is absorbed by a crack in time, thus erasing him from existence. Remember last week, when we talked about how Rory ended up as a plastic Roman soldier guarding Amy for 2000 years? This is part of that.)

Ok, so if it's a Silurian ship, where are all the actual Silurians? Jettisoned by the ruthless Solomon, a raider looking to steal the very valuable dinosaurs. (Solomon is played with malicious glee by another Harry Potter veteran, Mr. Filch.) When the Silurians wouldn't hand over the goods, he killed them, only to belatedly realize that he couldn't steer the ship without them. Karma, man. His own ship - now nestled in the middle of the Silurian vessel - is too tiny to take the dinos on board, so he comes up with a pretty decent Plan B - take Nefertiti instead. She's pretty damn valuable, and if the Doctor has a problem with that, Solomon is happy to start shooting people to make his point. The Doctor runs into a lot of nefarious people, but few come off as purely reprehensible as Solomon does, which makes it that much sweeter when Solomon gets his comeuppance.

Remember those missiles? Once Solomon loads Nefertiti on his ship, the Doctor takes a bit of the Silurian vessel, sticks it on board Solomon's ship, grabs Neffy and bolts. Solomon flies away and gets blown to bits. It was all rather vicious and more than a little satisfying. More importantly, it was an indicator of this particular Doctor's personality. Other Doctors would wrestle far more with the question of whether or not to kill an enemy, even one as vile as Solomon. To be fair, much of that is a symptom of how the audience and overall tenor of the show has changed. Classic Who was treated more like a straight-up children's show, so the Doctor's stultifying morality was a bit more understandable. In New Who, however, the Doctor's murderous inclinations - or at least his reaction to them - fluctuate. Sometimes he regrets being the deathly decision maker, other times he's practically gleeful to wield the axe. If you stop to consider that he's the last of his kind (or one of the last, depending on where you are in the series), hundreds of years old, incredibly powerful and pretty wise, you can begin to understand the impact constantly being forced to make such decisions could have on his psyche.

While the Doctor is dealing with Solomon, Rory and Brian work together to steer the Silurian ship away from Earth. Getting to know Rory's dad helps to emphasize just how normal Rory is, compared to everyone around him. Amy grew up with a crack in time decorating the wall of her bedroom, River Song saves the Doctor's life or tries to kill him, depending on where she is in her timeline and Rory ... has a dad who likes golf and carries around various tools just in case. After Brian gets shot, Rory whips out his own "just in case" pack of medical supplies, and the two have a charming moment when they discover that they're more like each other than they thought. It's sweet, and illustrates how Rory has grown up to be rather like his dad - a fine man indeed.

In many ways, Rory is reminiscent of an earlier companion, Harry Sullivan, who traveled in the TARDIS back in 1975. Harry was, like Rory, a medical professional and all-around normal bloke who just happened to be a bit of a ham-fisted idiot when it came to the whole traveling-in-time-and-space deal. He was sweet, good natured, and a contrast to the Doctor's other companion at the time, Sarah Jane Smith. Sarah lived for adventure and reached for the stars while Harry would've been just as happy at home with a pint. You can see similar parallels to Rory and Amy, though Harry and Sarah weren't a romantic item.

So that's a bit of the extended Whoniverse for this episode, but it's by no means exhaustive. Hardcore Whovians, feel free to add your knowledge by posting in the comments; Newvians, if you have questions, this is the place to ask! The goal here is, to borrow a quote from another favorite sci fi series of mine, to Share and Enjoy.

We'll meet here again next week to go over A Town Called Mercy!