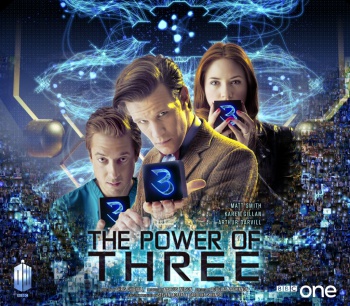 So with that, let's head off to The Power of Three!

Not a particularly active episode, but of course that was kind of the point. The slow invasion - a bunch of strange black cubes just sort of hanging around the place, not doing anything for the better part of a year - was just a background for an examination of the relationship between the Doctor, Amy, and Rory. Most of their time was spent waiting for the boxes to do something, so we got to see what they're all like when they're not busy saving the world from slavering aliens. And in the case of Amy and Rory, they're a perfectly normal married couple. She writes articles for travel magazines and is going to be a bridesmaid in a friend's wedding. He's a nurse who just got promoted to full time status at the hospital. Rory's dad, Brian, drops by sometimes for tea. And the Doctor ... well, he gets bored very, very easily.

It's an interesting contrast with the way things worked in Classic Who, where a companion was in the TARDIS, day and night, until they left, got kicked out, or died. Their role in life was as Companion, first and foremost, and everything else was on hold until that was done. In New Who, companions go home from time to time. Amy frequently complains to the Doctor how long it's been since he last came and picked them up. It's a small difference, but it does an excellent job of underscoring just how isolated the Doctor really is. Here he is, offering up all of time and space as a playground, and Amy and Rory are seriously considering staying home, because their other life is really quite appealing. To be fair, he is 1200 years old, and hanging around the garden probably loses its appeal after the first few centuries, but as much as he loves the Ponds he's never really going to be able to relate to them.

He does try to give them an anniversary gift of an overnight stay at a posh hotel, but the evening is ruined when it turns out there are Zygons underneath the building. It's a throwaway line, a nice chuckle for viewers who might remember this scarcely-used foe. Zygons are rather bulbous creatures that were first featured in Terror of the Zygons (1975) as they terrorized an off-shore oil rig with a huge underwater creature called a Skarasen. Their technology was organic in nature, with terminals looking like they had grown right out of the floor. They crash-landed on Earth centuries ago, but their home planet was destroyed before they could return. Their "body printing" technique allowed them to impersonate humans, which was handy not only for nefarious intrigue, but also for getting out of the heavy Zygon costumes. After the Doctor defeated the Zygons and destroyed the Skarasen's control device, it went back to the water where it had made its home on Earth - Loch Ness.