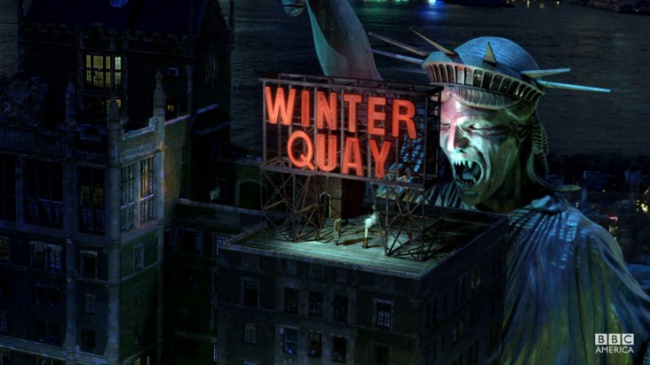 So with that, let's head off to The Angels Take Manhattan!

The time has finally come for us to bid farewell to Amy and Rory, much to the delight of many of you, if forum comments are to be believed. I personally adored the pair of them - though Amy in particular has been acting rather strange of late - and will be sorry to see them go. Our parting with them begins on a rock in Central Park as the Doctor reads aloud from a pulp novel and idly observes that Amy is getting lines around her eyes. It's a not terribly subtle reminder that Amy and Rory are aging as the Doctor pops into and out of their lives, much like the other not terribly subtle reminders from other episodes this season. Rory pops off for coffee and gets sent back to the 1930s, where River awaits him. Why? Because reasons. It's never made particularly clear how that all comes to be, but we do know from earlier in the episode that there's a particular apartment building in New York that is supposedly owned by the Weeping Angels, so I guess they had something to do with it. Also back in the 1930s, a wealthy collector has sent a detective to investigate the apartment building, and the hardboiled gumshoe is more than happy to take the money ... until he discovers his own name listed as one of the tenants on the building, and comes face-to-fangs with the Statue of Liberty.

Let's pause here for a moment to talk about the Weeping Angels, who first appeared in Blink (2007), one of the scariest Doctor Who episodes in creation. The Angels are "quantum locked," which means they can only move when no-one is looking at them, turning to stone statues when someone can see them. They also feed off people's potential time energy, zapping them into the past and forcing them "to live to death". All of that lore was chucked out the window for the two-parter Time of Angels and Flesh and Stone (2010), where the Angels suddenly sucked up radiation, tortured people for kicks, and just killed people instead of sending them back in time. The episodes were scary (and incidentally the first time River met Amy), but many fans were understandably miffed at the sudden change in lore. The Angels of Manhattan seem to be back on track, but the Angel Statue of Liberty was too much for me to bear. The idea that there is ever a point at which someone isn't looking at the Statue of Liberty is pretty ridiculous, for starters, and even if you can explain that away ... well, it's just plain silly. The scenes on the apartment building rooftop, with the Angel of Liberty snarling in the background, were eyeroll-inspiring, not scary.

Ok, so Rory connects with River and both are suddenly kidnapped and brought to that idiotic collector. Why? Pfft, don't worry about little things like that. Meanwhile, back in Central Park, the Doctor and Amy have suddenly realized that the things happening in the book are actually happening in real life, including Rory's kidnapping. They rush off to the TARDIS but can't find him without a bit of guidance, so they nip off to ancient China and put a few hints on urns destined to wind up in the collector's living room, right where River can see them. Rory, meanwhile, has been locked in a basement with a bunch of baby Angels with nothing but a box of matches to defend himself. River activates a homing beacon, and the TARDIS appears with a triumphant wheeze, but Rory is already gone and River's wrist is caught in an Angel's grasp. River breaks her own wrist to get free as the Doctor track's Rory's location. The Doctor uses some of his regenerative energy to heal River's wrist, which she considers "embarrassing." This event is apparently a Big Damn Deal for reasons that I couldn't really deduce. Well, whatever. She's all fixed up, Amy is wearing glasses because She's Getting Older, Remember? and we're off to go find Rory, who has turned up at a nearby apartment building. One with a spectacular view of the Statue of Liberty.

The apartment building is a pantry for the Angels, who send people back in time and suck up the time energy as their victims live out their days as residents. Rory meets up with the Doctor, River, and Amy at the building, only to realize that an elderly Rory is already there. As the Angels start moving in, Amy and Rory rush up to the roof, where he reasons that if he kills himself, it'll create a paradox negating the whole affair. The Angels will never have forced him to live out his days in the apartment building if he died there as a young man, so whoosh, off the roof he and Amy go. It's actually a rather touching moment, as he begs her to push him because he's too afraid to jump, and she decides to take the trip with him. I know that many people find Amy and Rory annoying, but I've always found their dedication to each other to be genuine and beautiful. In a time when marriage is frequently considered something old-fashioned, doomed, stifling, or pointless, I enjoy seeing it put forth as a source of strength. (I'm admittedly biased. Your mileage may vary.)

Turns out Rory is right, and his death does create a paradox that not only cancels out the Angels-owned apartments but the Angels themselves. He and Amy wake up in a nearby cemetery, where Rory immediately gets touched by an Angel (a lone survivor, quelle surprise) and sent back in time to live to death. The Doctor can't go collect him in the TARDIS because if he does, it'll blow up New York (hwa?), so Amy says peace out and sends herself back in time to live out her days with her husband. The Doctor, heartbroken, reads the final page of the book and learns that Amy and Rory lived a full and happy life together.

Much of this episode was wrought with emotion and I was teary as Amy said her swift and final farewells, but ye cats, what a mess. I know that Doctor Who has a lot of magic wanding in it even at the best of times, but this felt uncomfortably slapdash. Also, ok, we get it already - the Doctor hates goodbyes, but should never travel alone, don't let him see the damage he does to you or he'll leave you behind, yadda, yadda, yadda. I don't understand or enjoy this shift that suddenly the companions have to take care of the Doctor because he's so emotionally fragile. He's not a child - quite the opposite - and while examining the dark urges brought on by centuries of isolation (to say nothing of godlike powers) is quite intriguing, this feels more like babysitting to me. I just plain don't understand how the characters of River and Amy are supposed to relate to the Doctor anymore. Are they his caretakers? His emotional superiors? More and more, I feel like he's being painted as the mentally unstable relative that everyone just sort of follows around with a look of affectionate pity on their faces. The Doctor losing his marbles is a fine way for the story to go, one that has loads of potential, but I don't feel like that's really being explored. Touched on here and there, yes, but not actually dug into properly.

But perhaps you disagree. Have at it, Whovians and Newvians. I've really enjoyed all of the discussions we've had so far, and the multiple points of view you've all provided, so let's hash this out. We've got plenty of time to kill before the Christmas episode, after all.