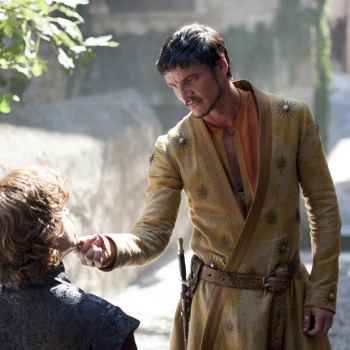 The meat of the episode introduces a new character and culture we haven't seen before - Prince Oberyn of Dorne. Watchers of the TV show have only very briefly heard of Dorne as the kingdom Joffrey's little sister is shipped off to right before the unwashed crowds throw poop at the king and go crazy in the riot of season two. So a little background - Dorne was the last of the Seven Kingdoms of Westeros to be brought under the rule of the Iron Throne, generations after Aegon the Conqueror, and only through marriage, not conquest. It's a mostly dry peninsula on the southern tip of the continent separated by mountain ranges, and its culture and ethnicity is very different than the pale folks to the north. Think of a warlike and fiercely independent Mediterranean culture - complete with cuisine known for hot spices - and you've got Dorne.

The ruling house of Dorne are the Martells - and in this episode they were supposed to meet little Tyrion Lannister on the Kingsroad. There's some tasty banter between Bronn and Tyrion as they wait, but the bannermen of the Martells show up and explain that Prince Oberyn has come to King's Landing for Joffrey's wedding, not the ruling older brother Prince Doran. Oh, and Oberyn snuck into the city the night before. "He's not one for welcoming parties," says the bannerman.

But he sure likes the ladies ... and dudes, apparently. Cut to one of Littlefinger's brothels, and we get our first nudity of Game of Thrones season four when Oberyn and his lady friend try to pick a companion for some dirty morning sexytime. As s-exposition goes, this scene isn't terrible. The writers are able to show Prince Oberyn's character, and his relationship with Ellaria Sand, pretty well without exactly showing us a sign that reads "He Likes Sex" or "He Goes Both Ways!" They did have to include Sand outright stating she's a bastard, and not actually married to Oberyn at all. And when our Prince hears some Lannister guards singing the Rains of Castamere next door - seriously, does everyone in this show only have sex in the daytime? - well, it's pretty cool to see him threaten and then calmly stab a dude in the wrist. Tyrion comes in to save the day, and Oberyn immediately lets the guards scamper off.

The two second sons then do some Sorkin-style walking-and-talking through King's Landing, and Oberyn tells Tyrion exactly why he's come. It all goes back to that fated rebellion of Robert Baratheon against the Targaryens. The Dornishmen supported the crown, because Oberyn's sister Elia was married to Prince Rheagar Targaryen. When Tywin sacked King's Landing, he ordered Gregor Clegane to kill Elia and her children. The Mountain-That-Rides did as he was told, and much more - raping Elia before he killed her and chopping up her babies before wrapping them in a red Lannister cloak. Oberyn spouts all these charges to Tyrion, setting up a major conflict of the season and we don't even care that the writers basically told us everything we need to know. Having a character exactly outline his intentions is just as good at creating drama as obfuscation.

Speaking of Targaryens, Rheagar's sister Daenerys has got some really big dragons now. They look amazing, and powerful, and generously detailed. The dragons' wings alone feel very real when they flap and rustle, reminiscent of elephant's ears. The CGI budget for this season four premiere is well spent showing the beasts as big as horses, and none too well behaved. The black Drogon seems cowed by Daenerys stroking his head, but he quickly growls viciously in her face over a bit of goat the other two were fighting over. "They can never be tamed," says mopey Jorah Mormont. "Not even by their mother." Foreshadowing!