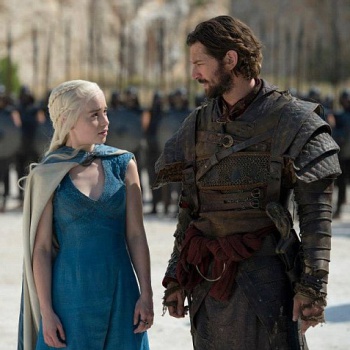 The rest of Daenerys' scenes involve reintroducing Daario Naharis as a man she could actually find attractive - apologies to Ed Skrein. The new actor Michiel Huisman definitely brings more of the loveable cad to the role than Skrein ever achieved. His opening scene with Grey Worm, captain of the new slave army Daenerys acquired at the end of last season, does well at reacquainting the audience where everyone stands. Ser Mormont is smitten, check. Ser Barristan is a stickler for formality, check. Daario is a scoundrel, check. Grey Worm is a eunuch, check.

Daario does try to win over the outwardly reluctant Daenerys with some bullshit about strategy and knowing the land you are conquering, but it's all just an excuse to give her some flowers. "You are a gambler," she says to the guy who murdered the people he was sworn to just a few episodes ago. Daenerys is just a young girl, what does she know about dudes three times her age trying to woo her? Kidding aside, the scene is actually pretty sweet and seeing the Mother of Dragons consider something more than survival and bellowing about freeing slaves is kind of refreshing.

It doesn't last, sadly. The column of Unsullied former slave soldiers stops, and Daenerys rushes to find out why. She is marching on the city Meereen , in case you missed that, and the rulers of the city know she is bent on freeing all slaves. Rather than capitulate, the Meereenese have nailed up a slave on a pole at every mile marker on the road to their city. The grisly shot of the young girl, who it must be noted bears a passing resemblance to the queen, pointing the way to the city is terrifying. "How many miles is it to Meereen?" Daenerys asks. "163." That's a lot of dead slaves. Daenerys grimly bellows she will witness the face of every slave before they are taken down and buried. Sigh.

You know, the guy who drank all that wine in the first episode of season two, was sentenced to death by Joffrey, only to be pardoned due to Sansa Stark's pleading and then never seen again? Right. That guy. Dontos was a minor character I fully expected the writers to abandon rather than try to flesh out further, but it looks like his role in being a confidant to Sansa was vital to the story. At least, it will be. I'll say no more!

The Sansa-Tyrion-Shae not-quite-love triangle gets some play, with the whore-turned-lady-in-waiting getting unreasonably jealous of the young girl her little man is ostensibly married to. Tyrion is caught up with all of the intrigue going on that he can't (or won't) make some daylight-sexytime with her, but listing the three things that are bothering him feels like a writer's way of making sure we're aware of those things. It just doesn't feel natural, even for an actor as great as Peter Dinklage, to rattle off plot points in a heated moment.

Jaime and Brienne look at Sansa, the object of Jaime's vow to the late Catelyn Stark. All of the hardship these two have been through to get Sansa to safety is within their grasp, but it's never black and white, is it? Sansa is actually Sansa Lannister now. Should Jaime send her away from her husband? Where? The Starks are all dead. Brienne, who still looks appropriately out-of-place despite getting cleaned up, gives him a sisterly stare. Is Sansa really safe in King's Landing?