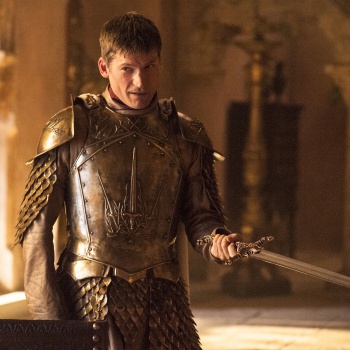 The fact that Jaime's real sister was also his lover further muddies his loyalties to Brienne and Sansa. He and Cersei spend a scene together and she basically rebuffs his sexual (again daytime) advances. "Everything has changed," she says emphatically, after listing another series of things that are bothering her just like Tyrion did. Unless listing off bothersome events is a Lannister trait, which it very well might be, having two characters do the same thing in back-to-back scenes is jarring evidence that the writers of Game of Thrones really need you to remember what's going on.

I don't envy the writers' task in further condensing such an already-dense plot, but the seams are beginning to show to those of us who pay attention to structure and craft. That's why this episode feels like it is just marking time - catching us all up with the threads the previous season left dangling. It may be too little too late, but the writers do try to resolve something for the audience by whisking us off to a wang-bang ending sequence with Arya Stark and the Hound.

These two witnessed the aftermath of the Red Wedding and the slaughtering of the Stark army at the Twins, but they are now wandering the wilderness , hungry and wet. The easy banter between two very different killers is funny, with Arya easily pointing out she would die without the stronger warrior to protect her, so she totally deserves her own pony. You know, come to think of it, I would totally watch a Stark and the Hound sitcom, especially after Arya recognizes a Lannister man-at-arms outside a tavern as Polliver, the guy who stole her sword "Needle" and killed her friend in season two.

"Of course you named your sword," the Hound says with derision.

There follows a tense scene between Polliver and the Hound in the tavern which predictably ends in some brutal fight choreography. The Hound handles most of the heavy-lifting, finally wrestling with a chap and smashing his eye sockets onto an open blade in the episode's gross out moment. Arya gets her revenge on Polliver by jumping out from behind an overturned table and hamstringing him. He falls on his back, giving Arya time to take back Needle and creepily recite Polliver's dialogue from when he killed the boy back to him. The soldier doesn't really know what the hell she's referring to, until maybe, just maybe, his wide eyes betray a glimmer of recognition right before Arya slides Needle under his jaw and into his throat.

Cut to Arya and the Hound munching on a chicken leg as they ride. Arya got the horse she wanted after all. Uplifting music plays. Hero shot. End credits.

The way Arya's murder of Polliver is shot doesn't feel quite that heroic though. I don't know about you guys, but a little girl reciting words somebody said 2 or 3 months ago as she's coldly sliding a metal rod through his neck isn't pure justice. She tortures Polliver with panic and confusion and just when he gets what Arya's talking about, she ends him. The preceding scene tries to make you hate Polliver as much as possible - he assumes Arya is the Hound's sexual plaything, and he tries to recruit the Hound to basically rape and plunder in the name of the King. Polliver deserved to die. No doubt about that. But Arya may not be right in the head as she does it. For many, this may be the first hint our little Arya may be more than what she seems, and none of it "good" or "moral."

Seeing as the show has been cherry-picking events from books four and five for use in these TV seasons technically much earlier in the chronology, it will be interesting how much we see of Arya's travels. We may have to wait until actress Maisie Williams gets a bit older, though. She's only sixteen, which means she can't be on set for endless filming sessions due to labor laws.

So while this episode admirably accomplished its task of refreshing our memories, and ended with a fantastically funny, emotionally complex scene with Arya and the Hound, it left me feeling like nothing had actually happened. You get these kind of episodes mid-season occasionally as plot points align for the climax, but I feel that a first episode needs to do more than just catch us up. I wished there was more progression with Jaime, instead of his biggest moment coming in the first scene with Tywin. I wish Oberyn wasn't just dropped into the story and then never seen in the episode. I wish this was Game of Thrones the sitcom.

If you're itching to hear a roundtable discussion of the show, have a listen to our Game of Thrones-cast discussing the premiere episode of season four here.

I mentioned Dan O'Halloran's gif recap of Game of Thrones at the top, but feel free to check it out again here.

Or if you want to take out your frustrations with George R. R. Martin's writing, you can Pick Your Path in this comedic take on the series by Mike Kayatta: End Game of Thrones.

Think Game of Thrones is overrated? Well, so does No Right Answer. Watch Chris Pranger's rant on the show here.

Matt Lees has been condensing the series to its funniest overdubbed moments in Game of Thrones Abridged and has seasons 1 through 3 ready. Look for the first episode of season four to be "Abridged" on Wednesday!

Finally, if you want to find out which (surviving) character you most identify with, you can take our personality quiz starting on Monday. Which Game of Thrones Season Four Character Are You?