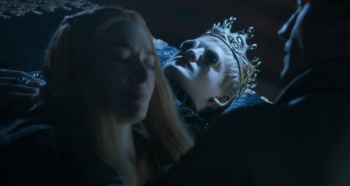 Welcome to the jungle. The moral morass of rape and incest suddenly comes to the forefront of the latest episode of Game of Thrones' season four. Unfortunately, the show runners D. B. Weiss and David Benihoff failed to correct the scene as it was filmed by director Alex Graves. I'm not really sure how all three could have misread the dramatic arc for Jaime Lannister, as he's clearly become an important character in the adaptation, but it is extremely disappointing. I was on the cusp of believing the HBO series was over its miscues and it might deliver an overall better-constructed story than the novels. Now, not so much.

Spoiler Alert: This review/recap will discuss in detail the events of episode three "Breaker of Chains" and there might even be some slight spoilers to what happens in the later books by Martin. You have been warned!

The showrunners have adapted a scene that deviated significantly from the books, and the internet is ablaze and rightly so. It's hard to see a show which understands the theme of Martin's novels so well but gets individual stories, scenes and arcs completely wrong. I was disappointed with how the show handled Danaerys's wedding night with Khal Drogo - making the act of sex much more rough and non-consensual than it was in the books - and the same mistake was made in this episode.

The scene everyone is talking about takes place in the Great Sept of Baelor, with Joffrey's body lying on a bier. Cersei is left alone. Jaime enters, and he tells all of the religious folks to piss off so the queen can grieve in peace. He approaches Cersei, and she begs him to kill Tyrion to "avenge our son," fully admitting the incest that produced Joffrey. Jaime protests, he's not sure what he saw, and he is waiting until the trial to believe whether Tyrion is capable of murdering his nephew. Cersei and Jaime embrace - she clearly needs comfort and she takes some solace in the one man she's actually enjoyed sleeping with. But then she sees the golden hand, and Cersei recoils in disgust. Jaime says, "You're a hateful woman. Damn the gods for making me love a hateful woman," and then spends a minute of uncomfortable struggling to get off her skirts, knock her to the floor and thrust into her. All the while Cersei says "No" and "It's not right." Jaime says, "I don't care." The scene ends with him still on top of her, thrusting away.

So that is a rape. Jaime rapes his sister, with the body of his son right beside them. At no moment does Cersei give any indication that she is into what's happening to her. She sobs and says "No" as many times as she can, and Jaime saying he doesn't care is a pretty clear indication as to his motives. He's taking what he's wanted since he returned to King's Landing and he doesn't care whether Cersei wants to or not.