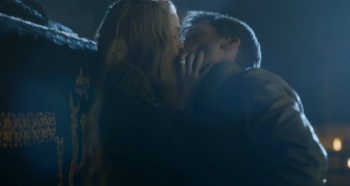 In Martin's books, Cersei and Jaime do have sex beside the corpse of their dead son, but Cersei wants to do it. She protests at first, but it's about the dangers of being caught in the Sept not about the choice to have sex or not. Cersei clearly desires her brother, and she consummates that desire by saying "You're home" when he enters her. She is broken with grief at the loss of her son, and Jaime is the only one that can make her feel whole. The sexual act isn't about sexual lust, really, but the hunger at feeling anything other than pain. Cersei choosing to have sex with her brother within feet of her cold dead son means so much more for all three characters than her rape does.

Of course, the chronology is off too. In the books, Jaime's first act coming back to King's Landing after getting his hand cut off in Harrenhal is going to the Sept to see his sister on the rumor of their son being dead. So their tryst in the Sept is the first thing they do when they see each other after a long absence. Cersei isn't really aware of the stump of Jaime's hand. That is, until after the act and yes, she then recoils probably more at the smell than anything else. In order to complete of the arc of Jaime returning from war last season, he needed to get to King's Landing a little earlier, which didn't seem like a huge change but impacts the scene here in the Sept. That's the danger of changing what appears to be the order of minor events in a complex story like this - the adaptation can suffer in ways the creators didn't anticipate.

Apparently, the writers, the director, and the actors in the HBO show all seemed to miss the implications of overstating Cersei's disgust with Jaime in the first episode of season four, and how that would play out in this weird orphan scene in the sept. I am sure someone made the point of asking why Cersei would have sex with her brother when she shows him nothing but disgust, but to my mind, the scene would have been a lot stronger if she had been swept up in the moment and then became immediately repulsed afterwards.

That's not the only problem. I'm not sure the director of the episode really knew how the scene would be perceived at all. According to the director Alex Graves - who's getting more name-checking on the interwebs today than he ever has before - the scene was meant to depict consensual sex, eventually. "Well, it becomes consensual by the end, because anything for them ultimately results in a turn-on, especially a power struggle," Graves said in an interview with Alan Sepinwall over at Hitfix. He then admits later that he and the actors didn't really talk much about the sex part. "Nobody really wanted to talk about what was going on between the two characters, so we had a rehearsal that was a blocking rehearsal. And it was very much about the earlier part with Charles [Dance]," he said. He also said they rehearsed four days before the scene was shot, so as to give them time to think about it instead of shooting the next morning as per usual. If he didn't want the sex to be rape, Graves did an awful job of it. Perhaps more rehearsal was needed.

I don't actually care about whether rape is depicted in TV, film or whatever medium, but I do think it should be used in a way that's responsible. The idea of a woman "being turned on" by a man forcing herself on her is very, very difficult territory to tread, and it should only be attempted with extreme care. What pisses me off is that it seems the director and actors themselves were uncomfortable with the subject material, so they just winged it. And what came out was a scene that's muddy as hell and screws with the character progression of Jaime Lannister. It's just meaningless, cruel rape, whereas the original scene in the books is so much more nuanced, creepy and, well, better.

The arc of Jaime Lannister's growth into more of a heroic character was something audience members could latch onto as a surprising development in a series now quite devoid of heroes. With one sloppily directed scene, he's gone back to being a villain. There is some chance that his actions later in the season will redeem him ... again - the next episode is called "Oathbreaker" which means Brienne will have something to do with that.

And it's even possible that Jaime's rape of his sister is his last horrible act - he survived through so much suffering with only the thought of returning to Cersei keeping him going. When she kept her love from him, he lashed out like the spoiled angry punk he used to be. I can imagine a story in which Jaime does what he does because he realizes what he was like, and he chooses to no longer be that way. He won't abandon his oaths anymore and he won't have sex with his sister any more either.