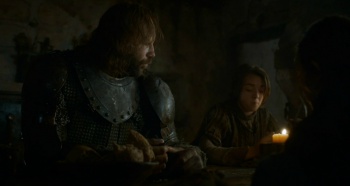 One of the themes of Martin's story is to destroy the fantasy tropes of heroism and honorable knighthood. He's reinforced that in so many ways: Sansa's doe-eyed love of Joffrey turns to torture, the beheading of Ned Stark, the Red Wedding. Every character that is good and honorable dies, while the cutthroats, schemers and liars survive. Perhaps that's the point of Jaime's rape of Cersei - this is not a story in which scoundrels and rogues turn into just heroes. Jaime will always be an asshole. They are no heroes in King's Landing, just assholes.

You could argue that's the point of several other scenes in this episode. Arya and the Hound are still riding through the Riverlands, pissing in fields and talking about going across the Narrow Sea, when they are stopped by a farmer. He says they are trespassing, but Arya deftly apologizes for her "father's" actions, claiming he's been rattled in the wars. There's another funny scene at the farmer's table - both Arya and the Clegane are hungry but the farmer drones on in prayer for all seven gods. The farmer offers the Hound honest work for honest silver, and Arya's surprised when he accepts. Until the next morning when the Hound beats down the man, takes the silver and rides away. "You are the worst man ever!" Arya screams. Sandor Clegane just says that he knows how the world works.

Following the comedy Arya and the Hound have shown in their scenes together, and the amazing action scene in the first episode, not to mention the memes that have popped up on the web, the audience clearly has a bond with these two companions. The Hound quit the King's service, and he fought for Arya. Maybe he's turning into a good guy? Maybe? Please? Nope, he's the Hound, a dirty realist who thinks it's ok to steal from a weak farmer because he will be dead soon anyway. Just assholes.

Sansa Stark is rushed through the streets of King's Landing by Ser Dontos. Dontos is the guy who claimed he was giving her a necklace that belonged to his family for generations, and who just so happened to have the foresight to flee the wedding as soon as the king fell choking. They get into a boat to go somewhere safe, and end up on a big sailing ship in a fog. Sansa climbs the ladder and is grabbed at the top by ... duh, duh, dunnnnnnh ... Littlefinger. Dontos asks Lord Petyr Baelish to pay him 10,000 gold coins so he can get back to the city and Littlefinger pays him with crossbow bolts to the heart and face. Sansa is confused, but Littlefinger gives away a little bit of his plot by taking off the necklace Dontos gave her and smashes the jewels showing them as glass. He was doing Littlefinger's bidding the whole time - Dontos was an asshole too.

Oh and Prince Oberyn? After some sexy talk with lads and lasses, Lord Tywin bursts in and has a heart to heart with the Prince of Dorne. The Hand of the King offers much - a seat at the small council, a place in the judging of Tyrion in Joffrey's murder - but he knows that Oberyn really wants: justice. Tywin is willing to trade the life of Gregor Clegane for Oberyn's loyalty. Oberyn just needs to accept Tywin's innocence, and it will all will work out just fine. The sad part is even though Oberyn passionately said he was in King's Landing to see Tywin brought to justice, he may trade all that for some lesser punishment of the Mountain. Oberyn is a bi-sexual asshole.