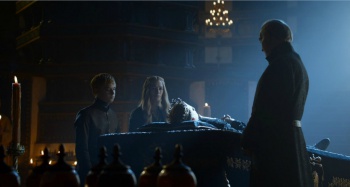 Tywin does some good in this episode though. Before the rape in the sept, he is there with Cersei and Tommen, the boy who is now king, all looking at the body of Joffrey. There's a shot that's eerily reminiscent of the show's first episode when it was Jon Arryn's body on display. The ever-scheming Tywin does not waste the first opportunity to speak to the new king. He begins coaching Tommen on how to be a good ruler as soon as he gets a chance - a chance he never had with Joffrey. Despite Cersei's protestations - "This is hardly the time or the place," she says to her father over the body of her dead son - Tywin seems to actually get through to the good-hearted Tommen with his teachings and you're left with the feeling that Joffrey's death will actually work out for the Lannisters. Again, all this seems a bit too good to be true for Lord Tywin, as if he knew Joffrey would not survive long. Yep, Tywin's an asshole, too.

In fact, the only pair who don't appear to be assholes are in the most dire straits. Podrick Payne, the greatest squire in the world, goes to see Tyrion in the dungeon. Pod's been approached to testify against Tyrion with a lie of buying poison for him, and Tyrion tells him to leave King's Landing. Their scene together is heartfelt and actually really sweet and seeing Pod walk out the door I couldn't help but think that's the last friend Tyrion is going to see for a while.

And Samwell Tarly isn't really an asshole either. He clearly loves Gilly, the girl he smuggled away from Craster's north of the wall and he sets her up in Mole's Town to keep her safe from the prying hands of the rapers of the Night's Watch. She will hate him for bringing her to a whore house though - so maybe he still is an asshole.

Jon Snow knows nothing, and is therefore kind of an asshole, but he also knows the wildings are coming. And he doesn't have much to do in this season before the climactic events at the end of the book, so the writers needed to create some plot for him. The answer, seeded in this episode, is to go to Craster's Keep to kill the brothers of the Night's Watch who murdered Lord Commander Mormont. I'm not really sure what's going to be the pay off there, and I wish the show's creators had spent more time foreshadowing the politics of the Night's Watch rather than waste time on made up action, but I'll wait to pass final judgment there.

Finally, we go across the Narrow Sea to witness Daenerys approaching the walls of Meeren. A champion emerges from the city, and pees in her general direction. We get another tedious introduction to the four named men traveling with her, and a somewhat badass Daario Naharis takes out the charging Meeren champion with a thrown dagger and a brief swipe of his arakh. The strutting champion silenced, and a quick piss from Daario, and Daenerys is free to speak. She starts delivering a stirring speech, which you at first believe is being delivered to the rulers of the city. But as it goes on, it slowly becomes clear that she is in fact speaking to the slaves of Meereen, who wear collars around their necks, asking them to rise up and strike against the enemies in the slave-owners around them. She is not an asshole; she is the breaker of chains.

The season is progressing, but this episode will really only be remembered for the bungling of Jaime and Cersei's sex scene. Like his character, it's possible the writers and director Alex Graves will be redeemed later on in the seasons. But maybe that's the point, they are all assholes too?