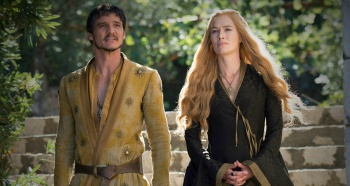 Women are taking over in Game of Thrones and I'm super happy about it.

One of the most distressful things about the badly directed rape shown in Breaker of Chains was how it casually dismissed the growing female empowerment in this season. In nearly all of the storylines - south of the Wall, anyway - the women in the cast of the HBO show have owned the most memorable moments and delivered the best one-liners. In First of His Name we are still clearly in a patriarchic society but it is the females who are primary characters in this episode.

Tommen is crowned king by the High Septon in the long-abandoned throne room of the Red Keep. It's nice to see the show return to this wonderfully gothic set, and the Iron Throne in all its sharpness. The gathered luminaries are happy to congratulate the new King, none more than Margeary Tyrell. But when Cersei intercepts the encouraging smiles Margeary throws to Tommen, the Queen Regent makes her way up to this upstart in the rafters. Oh man, this is gonna be gud! The blonde cougar is going to verbally swipe at the young and pretty girl to coldly insult and threaten her the way Cersei does with anyone she perceives at coming too near her territory.

But ... the threats never come. Perhaps the death of Joffrey has affected her more than we thought; in fact, Cersei even admits her first born boy was a monster. "The things he did shocked me," she says to Margeary. She then acknowledges that Tommen is a sweet boy, and even though he wasn't born to rule, he will need more help than a mother can provide. Margeary for her part is a bit wide-eyed. Is Cersei helping her in her bid to become Tommen's husband and queen of the Seven Kingdoms ... again? The pragmatist in her expects a trap but none seems to close. Not yet anyway.

We learn a bit of Cersei's motives with the Tyrells in her scene with Tywin. The two agree to have Tommen marry Margeary quickly - in a fortnight - and Cersei finally agrees to her match with Loras, a fortnight after that. For his part, Tywin tells her exactly why the alliance with the Tyrells is so important - the Lannisters are broke. The last gold mine in Casterly Rock went dry years ago. The Iron Bank of Braavos, which is angling to become a much bigger part of the series if the stirrings on Dragonstone and in the preview for next week's episode are any indication, will demand repayment of the loans Cersei refused to pay before the Battle of the Blackwater. The Tyrells have the coin, and if all they want is a beautiful, kind queen to marry into the family, so be it.

Cersei now has her father's confidence in matters of state, something she's always craved. Her sex prevents her from holding ceremonial power, but she always saw herself as a more worthy heir to Tywin's legacy than her brothers. Now that Cersei is all he has left, she seems quite content to do things "for the good of the family" and toe the party line - including marrying someone she does not desire. Her complacency in these matter will also sway Tywin's judgment in something she does desire - the conviction and death of Tyrion to avenge her son. I don't even think she thinks he really did it at this point, she just has to latch onto something.

It's Cersei's moment with Oberyn of Dorne that truly shows how much she's changed. She was outwardly rude and combative with him at Joffrey's wedding, insulting his paramour while vaguely threatening his country. But now, when she goes to see the Prince, she is open and raw. She shows how much she hurts and how it mirrors his pain regarding Elia's death. She speaks of Myrcella, the daughter being fostered in Sunspear, and Cersei's eyes tear up when she asks Oberyn to send her the gift of a new ship. He tells her not to worry, repeating that they don't hurt little girls in Dorne. Cersei replies, "They hurt little girls everywhere." What a line! And the performance clearly has an effect on Oberyn. Will he now be swayed to vote against Tyrion in the trail?

You see, I think it's all an act. Cersei's behavior in this episode is all orchestrated to secure allies and seem vulnerable, when she's nothing of the sort. Sure, she is broken after the death of Joffrey, but I think she realizes she has an opportunity here in King's Landing. She can still be a player in the game of thrones - she just has to get through the trial to remove the Imp and she will rule in Tommen's name for years to come. It was wonderful to see Lena Headey's portrayal be so multi-dimensional and I look forward to seeing her Cersei continue to evolve.