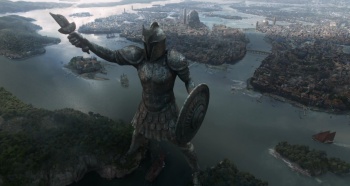 We open with a gorgeous shot of Stannis Baretheon's ship sailing under the stone skirt of the improbably large statue in the bay of Braavos. Following Davos' plan to get a loan to fund his next attempt at the ruling seat of Westeros, he presents his case to the Iron Bank of Braavos: Give me money because I'm the rightful lord of the seven kingdoms. You can imagine how that went over with the coin counters. Actually, you don't have to imagine it because they clearly and precisely spell out that he has no collateral to back up a large loan. He is denied and sent off with one of those tight smiles bankers like to give you when you've been dismissed.

Then Davos himself steps up and lays out an argument worthy of the best political strategist of the realm. Tywin is clearly running the show in Westeros, but he's old and when he dies, who is left? The dwarf everyone despises, the Queen Regent that is hated even more or the Kingsguard brother who cannot produce heirs. And of course, there is the question of Tommen's lineage. When things shake out, it's going to be Stannis with the only real legitimate claim to the throne. If the bankers want to back the winner in order to get their money back they loaned the Lannisters, Stannis is their best bet.

Did Davos make a convincing argument? Does HBO like to parade around some naked ladies in every episode? The answer to both these questions becomes apparent when Davos drops a lot of coin in front of the pirate Salladhor Saan who has two whores sitting on his lap. Stannis is funded again and is ready to raise a new fleet to take the throne.

Next, in the "never happened in the books, but makes for fine television" department, Yara leads a raiding party of Ironborn to rescue her brother Theon at Ramsay Snow's castle. While Ramsay engages in shockingly normal sex, her team locates Theon sleeping in the kennels with Ramsay's killer dogs. But when she tries to break him out, he refuses to go, claiming he's Reek, not Theon and bites her hand when she tries to hustle him out, retreating back into the cage with wild-eyed fear. Ramsay arrives with only his britches and a weapon and proceeds to tear apart most of Yara's crew. Being a psychopath, he decides to have fun with his prey and instead of trying to kill her himself, releases his hounds.

Somehow, through the magic of storytelling, I suppose, Yara manages to out run the dogs released in the very same room as her because in the next shot she is back down on the beach jumping in her boat and telling her men that Theon is dead to them. Ramsay shows great kindness to Reek by allowing him to bathe which makes Reek justifiably terrified that he is being set up to be tortured again. He is half-right. He is being set up to undertake a mission which will require him to act like Theon again which is probably torture to his broken mind and spirit.

You know, I was wondering who was going to be the new person we love to hate on this show once Joffrey got what was coming to him. I think it's clear now that Ramsay Snow is being set up to take that role, though Tywin and Cersei are coming in a close second and third.