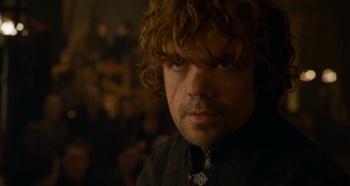 And now we get to the meat of this episode. The trial we've been waiting for. Tyrion is brought out in chains and Tommen recuses himself from the proceedings allowing Tywin to do something he's likely wanted to do for a very long time: legitimately sit on the Iron Throne. Oberyn and Mace Tyrell join Tywin as the other two judges. Then witness after witness testifies against Tyrion, reciting all the threats he made against Joffrey over the years, which Tyrion can't dispute. Grand Maester Pycelle, still upset that Tyrion had him thrown in the dungeons awhile back, testifies Tyrion raided his stock of poisons and even managed to procure the necklace that Sansa wore that held the poisons. Convenient that it's suddenly in his possession since the last time we saw that was on the boat the Littlefinger commanded to spirit Sansa away to the Eyrie right after the poisoning. Even Varys, who Tyrion thought a friend, testifies against him, likely because it's in Varys' best interest to go along with the charade.

Things look very bad for Tyrion. So bad, that Jaime goes to his father and lays out an offer. Jaime will give up the Kingsguard that he loves so dearly and take a wife to give Tywin legitimate heirs in exchange for Tyrion's life. Tywin accepts so quickly that it dawns on Jaime that he walked right into a trap Tywin had been carefully laying for quite some time. Still it saves Tyrion's life though the dwarf will spend the rest of it at the Wall as a member of the Night's Watch.

Jaime manages to tell Tyrion of the deal before the proceedings begin again. All Tyrion has to do is keep his mouth shut and beg for mercy at the end of the trial. Tywin will grant it and all will be well. But Cersei and Tywin have one more witness lined up that will inadvertently blow that plan to high hell: Shae.

Like the others, Shae tells (mostly) the truth, but in a way that makes Tyrion sound guilty. Her only outright lie was that Tyrion actively planned Joffrey's murder with Sansa. The rest of her testimony used their tender moments to make him look like a monster and humiliate him in front of all the nobles of Kings Landing gathered to watch the proceedings. And that was a really big mistake.

Peter Dinklage must not think he has enough Emmy awards because his performance here is absolutely stunning. He proclaims he wants to confess, but it's not to the murder of Joffrey. It's to being a dwarf and being the automatic whipping boy for everything that goes wrong around him even though he does nothing but try to help people. And instead of throwing himself at the mercy of the court and thus allowing his father's elaborate plans to proceed, he claims the right of combat to decide his fate, thus taking the matter out of the hands of Tywin and the court. And the stare he gives Tywin at the end of his tirade is the biggest fuck you of them all.