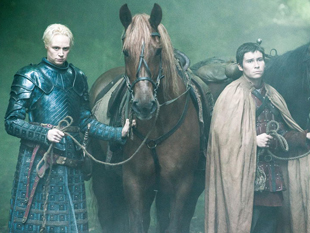 Who cares who the king is, when the most likely outcome for you is to die, alone and in incredible agony, simply because you were in someone's way?

Existing largely to shift pieces into place for the current season of Game of Thrones' climactic final three episodes, "Mockingbird" shouldn't have been as good as it was. It's an unfocused hour of TV that skips back and forth between storylines that are several books away from converging, without giving very much time to any of them - and of course, with a smattering of somewhat gratuitous violence and ridiculously gratuitous nudity to mix things up. Somehow, though, the episode, directed by Alik Sakharov and written by David Benioff & D. B. Weiss, is dense and difficult, and for once it offers the viewer a rare glimpse into the true victims of the terrible deeds done during the series.

Game of Thrones is a world where trauma and constant horror is as ordinary as the rising and setting of the sun. Obviously, this series has never shied away from showing that, warts, bloody entrails and all, but for the most part, the suffering and misery are seen only from the highest echelons of society. However, "Mockingbird" shows us definitively that as devastating as the wars for control of Westeros have been for the participants, they are nothing short of apocalyptic for those unlucky enough to live at the bottom of the social ladder.

More than any other episode this season, we see that it's the outcasts, the inconvenient, the weak, the poor, who suffer most when important people fight over serious things. Kingdoms rise and fall, and wealth comes and goes, but for the vast majority of people, life remains nasty, brutish and short. It's terrifying to consider, and it underpins almost every moment of this week's episode. Not bad for a show that, at least this season, has managed frequently to muddy the philosophical waters needlessly.

We begin in King's Landing, where things are about where we left them last week. After Tyrion's epic (and probably Emmy-winning) tirade against the hypocrites of the capital city, which culminated in his demanding trial by combat, he's back in his dank jail cell and entertaining a visit from Jaime.

Tyrion is wallowing in self pity over Shae's cruel betrayal in last week's episode. Angry at himself for falling in love with a whore and for being "stupid enough to think she loved me too," for a moment we're reminded that this isn't the first time Tyrion felt this way. Remember how as a teenager, he fell in love with, and married, a peasant girl, only to find out from his father that she was a prostitute? Yeah, that seems like important detail right now, doesn't it?

But neither we nor Tyrion have time to reflect on his life's odd and pitiful bookends, because he still needs to find a champion to fight on his behalf. Unfortunately, Jaime still has a long way to go until he's retrained himself enough that he could actually fight with a sword, much less pick one up, and he's forced to decline. What he can do, however, is berate Tyrion for throwing away his best chance to live. Tyrion plans on being defiant to the end, however, and takes the opportunity here to remind Jaime that begging for mercy would have been playing right into their father's hands.

The two of them reflect for a moment on the rotten state of their family, with Tyrion even calling Jaime out for fucking his own sister, but that brief tension between them doesn't last. They're both Lannister outcasts now, and seem to recognize they now really only have one another. But while Jaime cannot fight for Tyrion, he can give him intel, in this case the identity of the champion their sister Cersei has chosen.