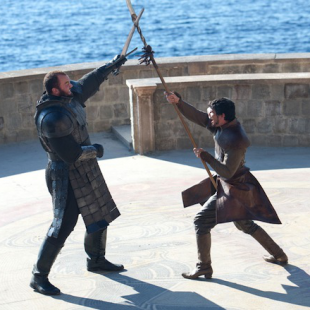 Like the gruesome beheading outside the Sept of Baelor, the spectacular battle of Blackwater Bay, and the bloody massacre of the Red Wedding, the events of last night's Game of Thrones was hotly anticipated by those of us lucky - or unlucky, as the case may be - to have read Geroge R. R. Martin's books. The visual translation of the duel between Gregor Clegane and Oberyn Martell did not disappoint. It was tense and gruesome, and will have fans talking for weeks to come. We also got to see some character development from little-bird-no-longer Sansa Stark, a cruel turn of events for Jorah Mormont and a quick laugh from Arya, not to mention what's brewing up North. The next (and last) two episodes of this season are going to be something to behold, but for now we're going to talk about "The Mountain and the Viper."

Let's get right to it - be aware there will be spoilers for the TV series in here, as well as possible leakage of book events as we discuss the implications of the adaptation. You have been warned, ladies and gentlemen.

Those wildlings are jerks, aren't they? After Sam stowed Gilly in Mole's Town a few episodes ago, we totally knew she'd be safe there, right?? After a memorable scene with a whore berating a man not getting what song she's burping - apparently there are only two songs in Westeros - she ends up dying when Torvald Giantsbane, Ygritte and the Thenns attack and slaughter everyone in the village. Gilly holes up in a corner, and Ygritte sees her but decides to let her go. The Night's Watch superfriends of Pyp, Grenn, Dolorous Edd and Sam all share a bleak drink with Jon Snow anticipating their deaths and suggesting that maybe, just maybe, Gilly got away.

I am still disappointed that Mole's Town isn't actually comprised of holes in the ground. There's something very evocative of a settlement that's designed to keep its populace warm in the winter, and offer protection when the wildlings raid over the Wall. You see, the wildings climb over it pretty regularly and attack the North, that's why it's generally deserted close to the Wall. That's also why the Northmen and Night's Watch hate them so much - they are a constant danger not only to the populace but they also steal iron and livestock to make up for meager lives north of the Wall. Mole's Town is within a day's ride of Castle Black, and it's almost completely supported by men in Black sneaking out to screw some ladies against their vows, so you'd think they would have a better defense system. Especially after Jon Snow has alerted them that a Wildling force is already over the Wall. Bah.

I miss Zei. In the books, Jon warns Mole's Town that an attack is coming and the villagers abandon it to help with the defense of Castle Black and save their arse. Zei is a whore, but she says she's good with a crossbow and knowing the Watch will need all the sharpshooters they can get, Jon sets her up on a tower. It was a great little subplot - that a whore could do more to stop the attack than a good portion of those left to defend it. I thought that's who the odd-looking woman with the crooked teeth and bad attitude in Mole's Town was shaping up to be, but then she turned out to be not very nice to Gilly, and get herself gutted by Ygritte. Another opportunity lost.