There's a lot going on in Westeros and I'm here to report that it's not all terrible.

In the penultimate episode to the fourth season of Game of Thrones, we got a lot of fighting at Castle Black. Jon Snow and the Night's Watch battled against the wildlings led by Mance Rayder, the King Beyond the Wall, and the raiders behind it led by the Thenns, Tormund Giantsbane and Ygritte. Dan O'Halloran didn't dig the episode as a whole, and while I agree that it didn't live up to its battle-heavy predecessor on the Blackwater, I found the scene with Ygritte and Jon was a perfect culmination of their relationship. I'm a big softie, I guess.

In the finale this week, we get back to the multi-story arcs the series is known for and tie up a whole bunch of loose plot threads, while ripping a whole set of new holes to get lost down. We are shown the horror of governing in the East with Danearys realizing putting things in chains is sometimes for the greater good. We get a crazy turn of events both North of the Wall and in King's Landing, but the moment that felt the most real was witnessing the closure with Arya and the Hound. The episode, and the season overall, changed the landscape of politics in the Seven Kingdoms forever. The power vacuum set off by the episode's dramatic events assures the huge audience HBO has built will return for season five.

On to the discussion. Be warned, the following will contain spoilers for the finale of season four, as well as touch on the events of the source material written by George R. R. Martin. Stop reading if you want to stay pure. 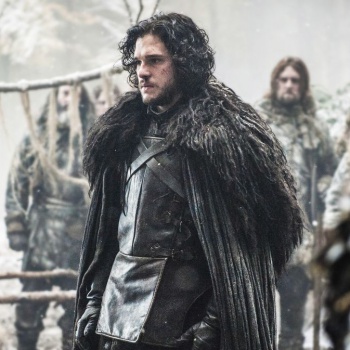 In the scene that should have concluded last episode, Jon Snow walks out to meet with Mance Rayder, the King Beyond the Wall. Snow's plan, if he has one at all, is to get close enough to Mance to kill him. The King is shrewd though, and sees the glimmer of honor in Ned Stark's son. He thwarts Snow's plan by offering him food and drink in his tent. To kill Mance now, after bread and salt have been shared, would be a heinous act before the Old Gods and the New. Jon hesitates just enough for Mance to call him on it. Here's the thing: Jon Snow actually admires the old crow and can't abandon his ideals just for the safety of the Night's Watch.

Also interesting in this scene is Mance's willingness to concede. He doesn't want to kill or murder the "crows" of the Night's Watch like the rest of the wildings seem to - Mance was a crow once after all. He has brought the wildings to the Wall for a different reason. He recognizes there's a deeper threat, the Others, and that if Jon doesn't let the wildings past the Wall - to hide behind it - the whole host of a million or more will come back as the walking dead to take it anyway. Jon seems convinced, but then the horns blare.

A large contingent of cavalry has arrived. Cavalry? Men in heavy armor? North of the Wall? What? Well, if you're surprised, you haven't been paying close enough attention. Stannis Baratheon and his Hand Ser Davos have been plotting this for weeks. All the machinations in Dragonstone, the travel to Braavos to secure funds, the conversation between Melisandre and Queen Selyse on her daughter traveling with them; All that has led up to Stannis taking the troops he still commands (several thousand knights) to the North to consolidate his power there. His cavalry decimates the unprepared and undisciplined camp of the wildlings, leading to a rout.

Mance lowers his weapons, instantly guessing this new power is now in control, not the Watch, not the wildlings. Stern Stannis assesses the situation with Jon Snow and Mance Rayder when he dismounts, well, except for that silly wildling who thought he'd kill the king. After the poor extra is cut down, Stannis and Davos confront Mance. Stoic, gruff white dudes versus other stoic, gruff white dudes. There's a lot to be decided in just a few minutes. Stannis begins by asking Mance to kneel, but the wildling refuses again and again. Jon Snow tells Stannis who he is, Ned Stark's son, and the two share a moment. On Snow's testimony of the honor of the former King Beyond the Wall, Mance is taken in chains.

Jon goes to Tormund, who is also in chains. He's not really sure why he's there, but the audience figures it out when he asks how wildlings prefer to be memorialized after a battle. Snow is asking about what to do with Ygritte's body. Jon rides out and lights up a bier with her beautiful red hair flared around her head. Jon lights the bier, and, in the end, Ygritte truly is kissed by fire.