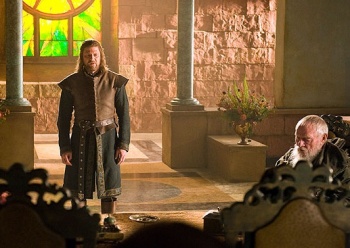 Fans of George R. R. Martin's book series probably have no trouble following along with the lavish Game of Thrones series, but those new to the material might have had a hard time telling Westeros from Winterfell. If you're a longtime fan,you'll definitely want to check out The Escapist's commentary on the series, but if you're a confused newbie, fear not! We'll be here with your weekly recap to help you keep it all straight. Or at least as straight as we can keep anything involving the Lannisters, anyway. We'll be doing these recaps each week. Let's go!

We got a lot of new characters and information dumped on us this week. It was a lot to take in, but we're starting to get answers to some of the questions that were raised in the first two episodes. Let's dig in!

NED STARK and company arrive at KING'S LANDING, which looks golden and warm - a stark (ha!) contrast to the barren cold of WINTERFELL. No sooner have they arrived than Ned is told that GRAND MAESTER PYCELLE has called a meeting of the SMALL COUNCIL, the King's advisors. As Ned makes his way toward the meeting room, we get our first glimpse of the IRON THRONE and see JAIME LANNISTER lounging across the dais. He rises to greet Ned, asking him if he feels uncomfortable in the throne room - the very room where Ned's father and brother died bravely at the hand of the Mad King, who burned them alive. This is the King that Jaime stabbed in the back to earn his title of Kingslayer - it also happens to be Aerys Targaryen, Viserys and Daenerys' dad.

Ned heads into the council room, where we're introduced to PETYR BAELISH, Grand Maester Pycelle, VARYS (not to be confused with Viserys), and RENLY BARATHEON in rapid succession. (To help keep them straight, Pycelle is the old one, Varys is the fat, bald one, Petyr looks just like an older Cameron Frye and Renly is ... the other one.) King Robert (aka Fat Bob) wants to hold a tournament in honor of Ned becoming Hand, but it turns out that the crown is six million gold in debt. Petyr figures they'll just borrow even more money from the Lannisters to pay for the tournament - which will cost a measly 80,000, (heck, chump change by comparison!), but Ned actually likes to have the money to pay for things and insists on talking to Fat Bob before preparations for the tourney go any further.

Meanwhile, CERSEI is tending the bite JOFFREY got from ARYA's wolf, and he is, true to form, complaining and whining like the little bitch he is. As spineless as he is, he does at least have an accurate view of what happened, which is he got his ass whupped in front of a couple of girls. Cersei doesn't quite remember it that way, displaying a remarkable ability to reject your reality and replace it with her own. He doesn't want to marry Sansa, thinks all Northerners are barbaric peasants and declares that, were he king, he'd take the North by force and make them all bend the knee to him. Cersei indulges his little self-important outburst, then reminds him that the North is too large and wild to be held. Joffrey declares the Starks his enemy; Cersei refines that by saying anyone "not us" is the enemy.

Arya, still pissed at ... well, the world, really ... is stabbing the table while Sansa sulks nearby. As Ned comes in, Arya storms off the way that only young girls can. Ned gives Sansa a doll to try to make up for having to kill her wolf, but she snottily declares that she hasn't played with dolls since she was 8 and then she storms off. (Has there been a kid on this show yet that isn't a complete pill? Might be the most effective birth control ever developed.) Ned follows Arya to her room, where he discovers her playing with NEEDLE. When Ned tells her that ladies shouldn't play with swords, Arya tells him she wasn't playing and doesn't want to be a lady. Mission accomplished, buttercup. Arya is really angry with Sansa for not sticking up for her about the whole Joffrey incident, but Ned explains that she couldn't really - she is supposed to marry Joffrey, after all, and publicly calling him a liar isn't exactly the best way to start things off. The Starks are in dangerous lands, he says, giving us the warmer, fuzzier version of what Cersei was saying to Joffrey. It's Starks vs. Lannisters in King's Landing, and the bad guys have home field advantage.