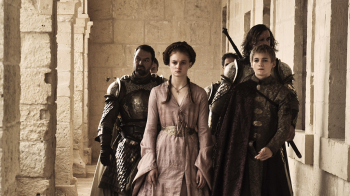 Over the past 9 weeks, we've been transported into the world of WESTEROS. We see that peace in the realm has been in delicate balance, because it all comes crashing and spiraling down rather quickly. "Fire and Blood" caps off the first season, but it ultimately serves to set-up much of the story that is to come in the next one and next novel. If you are a fan of the books and are interested in spoiler rich in-depth discussion of the episode, you should head over to Greg Tito's Fire and Blood commentary.

Our opening shot proves to fulfill the latter half of the episode title's namesake. We see the goopy bloody sword of SER ILYN PAYNE having freshly freed NED STARKS' head from his neck. YOREN, the member of the NIGHT'S WATCH we met earlier in the series, is quick to drag ARYA off in the commotion. The court is in an uproar because of JOFFERY's brash actions and the crowd is simply feeding off it. No one notices the man in black giving Arya a new haircut and instructing her that she is a boy now. She is to call herself Arry now and should she need to use the bathroom she ought to do it in the woods away from everyone else. Yoren has come to KING'S LANDING to raid the dungeons for new recruits for the Night's Watch, and he is leading a group of them back north to The Wall. In addition to a few unsavory fellows in a barred pen, Arry meets some of the younger boys destined for The Night's Watch. A rather portly one unsuccessfully tries to take away her sword, and we see that GENDRY, the blacksmith's apprentice and Robert's bastard son, is also bound for the Wall.

Ravens travel a fair bit faster than a sad procession of would-be watchmen though and news of Ned's beheading rapidly begins to spread. In WINTERFELL, both BRAN and his younger brother RICKON dreamed of their father returning to his place in the keep's crypt before hearing the news from MAESTER LUWIN. The other Starks are taking the news with varying degrees of civility. SANSA is later brought before the severed head of her father by Joffery and he even has one of the Kingsguard slap her around a bit. Ironically enough, we see a bit of kindness towards her from one of the least knightly and chivalrous looking characters, "THE HOUND". CATELYNCatelyn keeps on a straight face until she is out of view from the rest of the army camp. Her son ROBB seemed to have similar ideas, because she's drawn to the sound of him trying to hack down some massive tree with his now busted and dulled longsword. They promise to "kill them [Lannisters] all" after rescuring Arya and Sansa.

This is a thought somewhat known to the Lannister's themselves. With JAIME captured, his army scattered, the Northern men now having joined the FREY and RIVERRUN lords and both RENLY and STANNIS declared for the throne, the Lannister army is in a bad spot. TRYION is also quick to point out that Joffery's action just beheaded any hope of suing for peace. TYWIN LANNISTER orders his army to regroup at HARRENHALL, but he sends GREGOR out to raid the Riverrun lands and he sends Tyrion to King's Landing to act, and basically rule, in his stead. It's clear that the father favors Jaime, but Imp or not he still proclaims Tyrion to be his son and the man for the job in running the kingdom and keeping Joffery and CERSI under control.

Likewise the Nothernmen and Riverlords have their own ideas about who should be ruling now. Following Robb's crushing defeat of Jaime's forces, what started merely a means to get his father back has spiraled into something more as they all declare Robb to be the King in the North. It seems they were never quite so happy with the rule from the south in the first place, and now with the Lannisters, Stannis and Renly all vying for the Iron Throne they are all too willing to say to hell with it and let them keep the world's most uncomfortable chair. Even Theon pledges his eternal loyalty and service to his new "brother" king.