After escaping, the airbenders decide they want to go with Tenzin to train at the Northern Air Temple, most likely because they (and everyone with Korra) are considered war criminals to Ba Sing Se. This is the moment Tenzin has been waiting for -- and he was starting to lose hope -- his joy brings tears to his eyes. As the episode ends, the group splits up, with Tenzin taking the liberated airbenders to train and Korra seeking out other airbenders across the world. 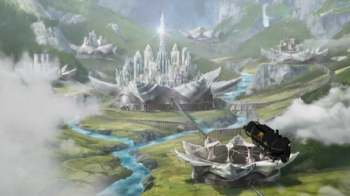 "The Metal Clan," the fifth episode of Book Three is more compelling, bringing in new characters and an exciting new city. Team Avatar is on its own again. Kind of. Korra, Asami, Bolin, and Mako are joined by Lin Beifong. Sure, she might insist on being there to protect Korra from Zaheer, but it's still an odd composition for the group. When Mako and Asami report that there is an airbender in the metal city of Zaofu, Lin is uncomfortable and short-tempered, so it looks like we might get some background on everyone's favorite police officer. Yes, I remember that Mako was a police officer. We all like Lin more though, right?

Zaofu is gorgeous. Its design is elegant but strong, much like the metalbenders that reside there. The shifting stairs, doors, and buildings are beautiful to watch in motion, as are the metal dancers choreographed by the city's Matriarch and founder, Suyin Beifong, Toph's other daughter. Lin hasn't spoken to her half-sister in over thirty years, and while they couldn't be more different, they do share the less than stellar parenting from their mother. Seriously, this show could just be called The Legend of Questionable Parenting at this point.

We get some insight into the history of Lin, Souyin and Toph in this episode. After being raised by extremely strict parents, Toph granted complete freedom to her own daughters, but she was still disappointed in them, with Lin following in her mother's footsteps by joining the police and Souyin wandering the world. Another huge fact just casually mentioned during the episode: Toph may still be alive. The Blind Bandit and inventor of metal bending left one day to seek enlightenment and hasn't been heard from since. I actually believe if anyone could survive this long, it would be Toph, and hopefully we'll get to see her be old and badass at some point in the series.

It is Souyin's daughter, Opal, who is the airbender Team Avatar is there to recruit, but Souyin isn't comfortable with Opal leaving "the safest city in the world." Which, of course, means it will be attacked at some point in the near future, but until then, we get more family drama. Varrick, the eccentric and flamboyant (and awesome) businessman has been working for Souyin, but the fact that Lin's sister has been hiding the criminal just exacerbates the sibling rivalry. 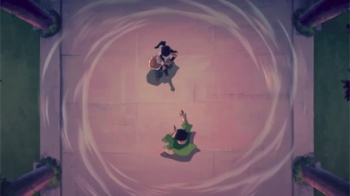 While Korra and crew stay in the city, Opal and Bolin start to develop and romantic relationship and Opal's scene training with Korra was wonderful, with gorgeous visuals and fantastic music. She's also quite talented for a new airbender, and we will almost certainly see more of her over the rest of the season. Sadly, when she pours her heart out to Lin, she is cruelly pushed away. After criticizing Lin, Korra storms out, leaving the metalbender we all love (and now kinda hate) in tears.

At Air Temple Island, Zaheer, now with a shaven head, infiltrates the home of Tenzin's family as an airbender seeking refuge. He excels as a pupil of Meelo, Tenzin's ridiculously goofy son. His impressive airbending skills, along with his questions about the location of the Avatar, draws the suspicions of Tenzin's sister Kya. When she catches Zaheer sneaking around, she realizes who he really is, and they engage in an exciting fight (Kya waterbends like Aang!) before he escapes.

Overall, the second episode was much more fulfilling. While "In Harm's Way" quite literally revisited the old places of Avatar: The Last Airbender, "The Metal Clan" fulfilled the spirit of visiting exciting new places and meeting new characters. I just hope that the frustrating attitude Lin is carrying drops off soon and pays off in the next episode or so. The same goes for Bolin and Opal's potential relationship. Where Jinora and Kai feel forced and obvious, Bolin and Opal are actually kind of fun to see together, even if it is a little reminiscent of a relationship from ATLA. Drawing storytelling cues from Avatar is one thing, but if Opal turns into the moon or something, I'm done.