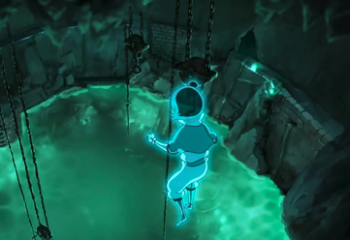 This week's episodes are a mixed bag, with one thumbs up and one thumbs down.

Legend of Korra returned this week with two new episodes for Book Three, "In Harm's Way" and "The Metal Clan." During the two episodes, the series continued to borrow from Avatar: The Last Airbender's story mechanics. The first episode continued to mirror a story from ATLA, but even considering it's much briefer than Aang's adventure in Ba Sing Se, the episode has far less impact than it should. Unfortunately, the story in the Earth Kingdom city feels like filler, and its impact on the story arc could have been done a million different ways. But on the bright side it's for the best that we are moving on -- and at least we got a few great scenes.

The second episode, "The Metal Clan," proved much more interesting and dense. Returning to the world exploration promised during the premiere, the team journeys to the first new city I recall seeing in some time. It's gorgeous, unique, and fits entirely within the style expected from the people that created it. A couple of new characters are introduced, and background is provided on an old favorite. The way this character is written for the episode makes them hard to have any empathy for -- but hopefully the resolution will make it worth watching someone we like be a jerk to everyone. There was a lot of set-up in the episode, but it still managed to be fun to watch. I just hope the delivery and/or resolution is better than what we got in Ba Sing Se.

If you want the details on the two new episodes, check out our spoiler-filled recap below.

The three-part premiere two weeks ago revealed that when Avatar Korra left open the portals between the mortal and spirit worlds, people around the world gained the ability to airbend. Tenzin, the son of Avatar Aang, is excited to hopefully bring the nomadic airbender society from the brink of extinction after the attempted genocide by the Fire Nation. He, Korra, and friends have started their disappointing journey to recruit new airbenders, with only trouble-making orphan Kai joining them. After making it to the Earth Kingdom city of Ba Sing Se, Korra is rebuffed by the Earth Queen, told there are no airbenders in the city. In fact, all known airbenders are being conscripted into military service, and Kai is their newest captive.

Meanwhile, a dangerous criminal, Zaheer, broke free from his cell once he became an airbender. His journey to free an earthbender and a waterbender from their individual prisons gains the attention of Fire Lord Zuko, who states that the Avatar is in danger once he arrived at the North Pole to stop them from releasing a firebender.

The fourth episode of Book Three, "In Harm's Way," opens at the North Pole. Zaheer leads an attack on the prison where the firebender P'Li is held. The scene starts brilliantly, with the visuals and music adding to the tension as the fight begins, but unfortunately the scene loses momentum fast. Watching the armless waterbending villain Ming-Hua was just as exciting as it was when we saw her break free from her cell, and her fight with the twins Desna and Eska is brilliant. Still, this is the return of Fire Lord Zuko. Maybe the anticipation was too much, because the old man is knocked on his ass before we can blink... but at least we get to see his dragon join the fray for a second. Of course, Zaheer escapes with his three allies, and when he and P'Li exchange a kiss, I was just as uncomfortable as earthbender/wheelman Ghazan.

Back in Ba Sing Se, Mako and Bolin return from their family in the lower ring and inform Korra and Asami that the airbenders in the city are being taken and forced into military service. Using astral projection, Tenzin's daughter Jinora helps to find the captive airbenders The team first checks under Lake Laogai, knowing that in Aang's time it housed a secret facility of the Dai Li, Ba Sing Se's secret police, but it has been destroyed. Using her spiritual connection to Kai specifically, Jinora finds him beneath the Earth Queen's palace and the team plans their assault.

Lin Beifong, Republic City Chief of Police and daughter of Toph from ATLA, shows up to inform Tenzin that Zaheer and his team have escaped. We finally get a little exposition about that group, but not much. Apparently, when Korra was revealed to be the Avatar, Zaheer's group tried to take her, but no one knows why. This is also the reason Korra was kept in hiding while she trained as the Avatar. Korra refuses to flee to Republic City and Lin agrees to help rescue the airbenders.

It's a straightforward rescue operation as the team splits up to find Kai, the rest of the airbenders, and prepare the airships for their escape. The whole thing was actually rather boring. Some of the thrill is lost knowing that Korra and Tenzin would pretty much be able to handle anything that is thrown at them, but it was fun to see the other airbenders support them. Mako and Bolin fighting as a team was a surprisingly fantastic treat, but interestingly it was newcomer Kai who stole the scene. In fact, his short moment in combat earned cheers from the viewers in my living room.