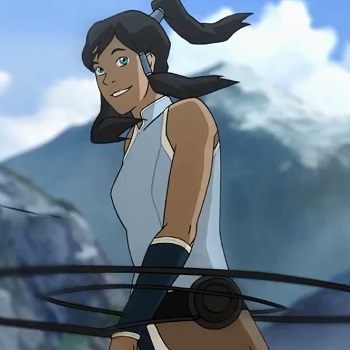 Korra is attacked by Zaheer and his gang, and the reality of the threat hits home.

This past week saw the last on-air broadcast of The Legend of Korra for the foreseeable future, but at least the episode, "The Terror Within", included one of the showdowns we've been looking forward to, even if it was restrained. The episode telegraphs the big reveal, but the follow-up was much more exciting than expected and by the end of the episode the audience finally has a reason to view the antagonists as "the bad guys". Up to this point, Zaheer and his gang have only been guilty of breaking out of prison and sneaking around, but now that their path has finally crossed Team Avatar's they've shown how vicious they can be.

Legend of Korra has had a rocky week. First there was the shocking news that the show would no longer air on Nickelodeon after this last episode, "The Terror Within", but then fans were told the show would continue to be made available online. There's still no news on how this will affect the confirmed Book Four. On the bright side, we've finally seen some gameplay from Platinum Games' downloadable Legend of Korra game.

As far as the move to digital is concerned, I expect it is the right move. Korra doesn't belong next to SpongeBob, and while there are plenty of young fans, the show definitely has an appeal to an older audience who takes advantage of watching their shows online. At first, Nick refused to put the first half of Book Three online, presumably due to the leak of a few episodes before the season premiered. Now that the series is moving to digital, the older episodes of Book Three are available.

From this point on, new episodes of The Legend of Korra will be made available on Nickelodeon's website on Fridays at 12 pm EST.

The new episode, "The Terror Within" opens with a cute little farewell dinner for Opal, daughter of Suyin, Matriarch of the metal city of Zaofu. The eccentric inventor Varrick shows off a new invention: a tool for finding new airbenders. Varrick has had a lot of tech that he's revealed this season, but none of it has actually been used yet. I'm starting to wonder if all of these technologies are just quick jokes with no real purpose. Before the action of the episode kicks off, we also get a quick scene of Korra and Bolin metalbending, and of course Korra is fantastic while Bolin struggles just to move metal.