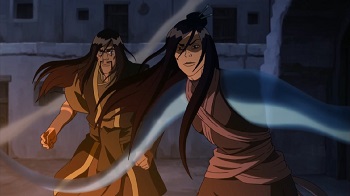 Zaheer is a member of The Red Lotus, a splinter group of The White Lotus, that awesome group of old people of which Iroh was a member. Dissatisfied with serving the Avatar, the Red Lotus split off, and later Zaheer and Korra's uncle, Unalaq, worked together on a plan to release the dark spirit Vaatu, which Unalaq did last season (and was promptly shut down by Korra). Zaheer's goal is to rid the world of nations and leaders, and he rightly points to the "moronic president" of the United Republic of Nations and the "tyrannical" Earth Queen. He even points out that Korra has already worked partway to this goal by leaving the portal between the spirit and mortal world open. Of course, Korra is a little uncomfortable with his "destroy the world to rebuild it" plan. Korra isn't exactly an anarchist, and asks Zaheer to use his considerable skills for good. Zaheer states his respect for Korra and her wisdom, but ominously states that Red Lotus should have her physical body captured by now.

Before Zahaeer stated getting talkative with Korra, he managed to inform the Red Lotus that Korra's physical body was in Misty Palm. Ming-Hua and Ghazan attack Team Avatar to capture Korra's body. Asami takes Korra on Naga while Mako and Bolin hold off the Red Lotus, but they can't match Ghazan's lavabending or Ming-Hua's unique waterbending. It's still fantastic watching these new benders, especially Ming-Hua. The way she uses water in place of her missing arms makes any fight scene exciting to watch. Of course, they are captured, as are Korra and Asami. When Korra awakens, she is bound like she's Hannibal Lecter, straightjacket, mouth-guard and all, and Asami informs her they were captured by the Earth Queen's forces, not the Red Lotus. 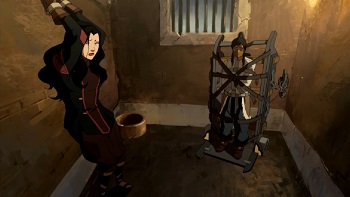 With Korra captured by the Earth Kingdom and the Red Lotus on their way to Ba Sing Se to take her, it looks like our storylines are finally starting to come together. Honestly, I would be more than pleased to watch the Red Lotus (so glad we have a name for them now) completely destroy the Earth Queen's forces. They might both be the enemy, but at least Zaheer isn't nearly as frustrating as the Earth Kingdom and its past political leaders have been. This is also our second episode in a row without any of Tenzin and his airbenders in training, so we might be building up to a rescue on their behalf. Not to mention the possible return of Toph Beifong. Maybe we'll see a reunion between her and Fire Lord Zuko before the end of the season. That actually might be too much fanservice, but I want it anyway.