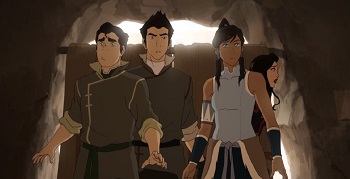 Last week, The Legend of Korra moved to digital only, and if you could navigate Nick's website and then get the video player to function, then you could see the ninth episode of Book Three, "The Stakeout". Series co-creator Michael Dante DiMartino stepped in to write this episode, presumably because a lot of exposition happens. We're approaching the end of the season, so it's time to get the backstory out of the way and put our heroes into a dark place before the conclusion. The history of Zaheer is interesting, but underwhelming. His motivations and goals are simply explained to the viewer, telling rather than showing, and it's a little disappointing. Seemingly separate elements from that have been established throughout the season are starting to come together, but so far this entire season has been build-up with a series of small pay-offs. Hopefully these last four episodes can deliver, otherwise Book Three might end up being completely forgettable.

Spoilers through "The Stakeout" below.

Team Avatar (Korra, Mako, Bolin, and Asami) are hunting down Aiwei, a metalbender that betrayed them in the previous episode. Aiwei is somehow allied with Zaheer, the airbending leader of a gang of very unique benders, P'Li, Ming-Hua, and Ghazan. Zaheer gained his ability to airbend after Korra left open the portals between the mortal and spirit worlds, which has caused a lot of problems. While there are new airbenders to rebuild the airbender nation, the Earth Queen is trying to conscript them into a military and has put a bounty on Korra and her friends for freeing her airbenders.

Thanks to Korra's polar bear dog, Naga, the team tracks Aiwei to the Misty Palms Oasis, the dry desert village from Avatar: The Last Airbender, which is now heavily populated by spirits. Mako and Bolin find Aiwei in the town while Korra and Asami learn that he is meeting Zaheer at Xai Bau's Grove, a location they can't find on the map. The team sets up a stakeout, watching for Aiwei to leave for his meeting. To pass the time, Bolin and Asami play Pai Sho, the game Uncle Iroh loved so much in The Last Airbender. First, they disagree about how the game should be played, but Asami fans will be happy to know that Bolin gets wrecked repeatedly. 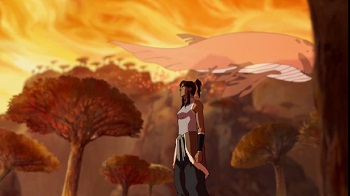 Korra has never been the patient type, and as the sun is setting she finally storms into Aiwei's room, only to find him meditating. Suddenly it clicks with her: Aiwei and Zaheer are meeting in the spirit world, something only possible since Korra left the portal between worlds open. She sits right there and takes herself into the spirit world and confronts the two of them. Remember the Fog of Lost Souls from last season, the place in the spirit world that drives people insane by forcing them to face their worst memories? Zaheer tosses Aiwei in there before inviting Korra to sit down and talk. Exposition time.