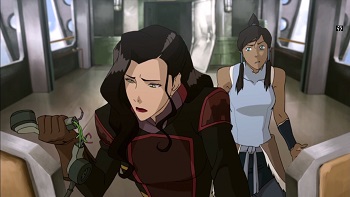 Episode 10 of Legend of Korra: Book Three, "Long Live the Queen", takes the series down a darker path, one which might be part of the reason the show is no longer broadcast on the Nickelodeon channel, but only on their website. Things were already looking grim with the entirety of Team Avatar captured, Mako and Bolin by the anarchist Red Lotus group, Korra and Asami by Earth Kingdom forces. With the Red Lotus in pursuit, that brings them to the capital of the Earth Kingdom, Ba Sing Se, and directly before the Earth Queen herself.

These two factions have been built up through the course of Book Three, and the confrontation is a turning point within the Avatar universe. It's dark, especially for a Nickelodeon series, but it goes beyond the obvious actions taken by the antagonists. This entire season, the Red Lotus have seemed questionable, but not entirely evil. They may be Korra's enemies, but are they wrong? The Red Lotus leader, Zaheer, has called out the ineffective or cruel leadership of the various nations and commended Korra for her past decisions and current wisdom. Ba Sing Se has been the example of a population suffering under poor leadership, both in Legend of Korra and Avatar: The Last Airbender, and bringing a group like the Red Lotus to the city of the Earth Queen is bound to have severe consequences. 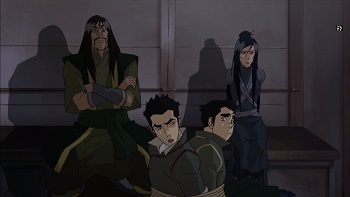 As for Team Avatar, while they have the majority of the screen time, they are certainly not the stars of the episode. Still, Asami gets to shine in this episode in all the ways that make her an excellent member of the group. Her problem solving skills, technical ability, and physical prowess all shine in this episode, reminding anyone who may have forgotten just why she's a part of Team Avatar. Bolin also continues to be what we wanted this whole time. Book One Bolin was great, but in these series, you have to develop, and his growth in Book Two left much to be desired. Now, in Book Three, Bolin understands he is a bigger part of a bigger world, but he still maintains a positive connection with most people. It seems at least once an episode he gets more than a few lines straight of fantastic interaction with someone different.

The Legend of Korra is now released digitally, on Fridays at 12pm, est, on Nick.com. The site also includes the previous episodes from Book Three, with the first two seasons on Amazon (Book One is free with prime). If you've missed them, make sure to check out the reviews and recaps for previous episodes.

Spoilers through episode ten of Legend of Korra: Book Three "Long Live the Queen" ahead.

After freeing the airbenders conscripted by the Earth Queen, Team Avatar has had a bounty on their heads and are being hunted by Earth Kingdom forces. At the same time, the Korra has been the target of pursuit by Zaheer and his gang, now revealed to be the Red Lotus. In the last episode, Zaheer told Korra that the objective of the Red Lotus was to bring balance to the world by eliminating nations and leaders, but he still hasn't revealed why they are after the Avatar. By the end of the episode, Korra and Asami had been captured by the Earth Kingdom and Mako and Bolin by Zaheer's gang.