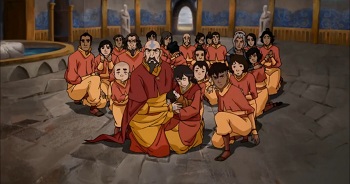 After Korra receives Zaheer's "Ultimatum", she gets some advice from an old friend, but is it too late?

If the previous episode of The Legend of Korra made viewers question whether Zaheer is truly villainous, the newest episode, "The Ultimatum", certainly answers that question. It's slightly regretful that the character has lost some of his nuance, but on the other hand the end of the season is coming up and the stakes must constantly increase. And this episode certainly succeeds at creating consequences. Now the lives of those Korra cares about and the future of a nation depends on how the Avatar handles Zaheer and the rest of the Red Lotus.

The episode starts out fairly light-hearted, even against the backdrop of a city in chaos. Mostly, this is achieved through the comic relief of Bolin, which the show always relies on and hasn't failed us this season. After Mako and Bolin deliver a disturbing message to Korra from Zaheer, she ends up getting advice from a couple of old friends, which presents an interesting question: Just how much like Aang is Korra? Will she deal with this situation in the same way as the previous Avatar? 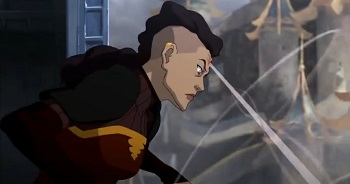 It's a question she needs to answer sooner rather than later; by the end of the episode, Zaheer starts to execute his plan. It's one of the more exciting and heartbreaking conflicts in the series, similar to Book One's "Turning the Tides", wherein Lin Beifong loses her bending ability. Like to this week's "The Ultimatum", that was also the last episode before the two-part finale. If this is the episode where viewers are meant to become emotionally compromised by the antagonists, then I would say it was a success.

The Legend of Korra is now released digitally, on Fridays at 12pm, EST, on Nick.com. The site also includes the previous episodes from Book Three, with the first two seasons on Amazon (Book One is free with Prime). If you've missed them, make sure to check out the reviews and recaps for previous episodes.

Spoilers through episode eleven of Legend of Korra: Book Three "The Ultimatum" ahead.

At the end of last week's episode, "Long Live the Queen", Zaheer killed the wicked Earth Queen and "liberated" the city of Ba Sing Se. Delivering a speech about freedom, the walls of the city that had separated the different classes for hundreds of years were torn down and the cities' prisoners freed. Predictably, this has led to the city plunging into chaos, complete with looting and fires. Mako and Bolin, recently freed from prison by Zaheer so they could deliver a message to Korra, rescue their rather large family as they escape the city. Over the next few scenes, Bolin continues to be a much needed and realistic source of comedy in an otherwise very dark situation. One moment that stood out to me in the rescue sequence was the fact that Mako and Bolin's grandmother made an effort to save her picture of the corrupt Earth Queen. Even after being trapped in the lower class section of the city and being ruled by a leader that viewers openly saw as villainous, we are still presented with the fact that some citizens will still love such rulers. It's one of those considerably mature concepts Avatar: The Last Airbender and The Legend of Korra has always included that most shows targeted towards children avoid. 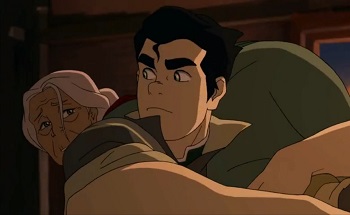 After finding Korra and Asami -- who Mako's grandmother awkwardly suggests as potential romantic interest for Mako -- the brothers deliver Zaheer's disturbing message. Zaheer intends to wipe out everyone at the Northern Air Temple if Korra does not surrender herself to the Red Lotus. At the Northern Air Temple is Korra's mentor and son of Aang, Tenzin, as well as Tenzin's entire family and the entirety of the newly formed Air Nation.

The Fire Nation's genocidal attack on the airbenders was well over a hundred years ago, and the future of the Air Nation depended entirely on Tenzin and his children. After the end of Book Two, when Korra left open the connection between the mortal and spirit world, a number of people started to gain the ability to airbend. Most of these new airbenders have gathered at the Northern Air Temple to train under Tenzin and have become the new Air Nation. Now, the Air Nation is facing the threat of genocide once again.