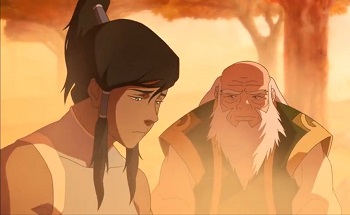 Korra attempts to reach Zaheer in the spirit world, where she knows he visits, but doesn't find him there. Instead, she stumbles across someone we haven't seen in some time, Uncle Iroh from Avatar: The Last Airbender. Of course, Iroh humbly offers sage-like advice to Korra, reminding her that even though she cannot contact the Avatars of the past as she once did, she does have a connection to an old friend of Aang, Fire Lord Zuko. Korra returns to the mortal world to find Zuko about to leave to protect his home and his people, which Korra respects and understands (she really is growing up). After sharing that she has spoken to Iroh, Zuko's uncle, she asks what Aang would do in this situation. Zuko shares that few things mattered to Aang more than rebuilding the Air Nation, but at the same time Aang understood that it was his responsibility to protect the whole world, not just his personal interests.

Aang was more than willing to sacrifice himself to protect others, and even in the beginning of The Last Airbender he surrendered to the Fire Nation and Zuko in order to stop an attack on the Southern Water Tribe. Is Korra prepared to do the same? And would surrendering herself to Zaheer and the Red Lotus put the world in more danger, as they have not revealed their plans for what they will do once they have the Avatar? It is doubtful that the answer lies in acting as Aang or the Korra from Books One and Two, as either could lead to plunging the world into chaos or the destruction of the Air Nation, respectively. Korra will need to act quickly, though, as Zaheer shortly afterwards arrives at the Northern Air Temple. 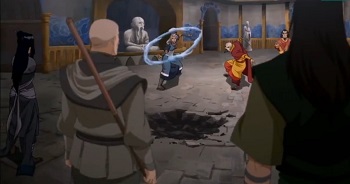 It's one of the most painful confrontations in both ATLA and LoK, as Tenzin and his siblings Kya and Bumi face off against Zaheer, Ming-Hua, and Ghazan, respectively, while the rest of the airbenders attempt to escape, but face trouble with P'Li. Kya and Bumi are barely able to keep up with the unique bending of Ming-Hua and Ghazan, especially since Bumi is still new to bending. Still, it is fun to watch Bumi resort to biting and hair-pulling. The siblings are shut down while the other airbenders try to get to the sky bison.

Kai, the troublesome thief we all seemed wary of (not for the thief bit, but for the somewhat forced youth romance between he and Jinora), steps up in a big way, taking to the air to distract combutionbender P'Li, who attacks the new airbenders from an airship. He does fairly well until he is blown out of the sky and seemingly falls to his death. P'Li then simply scares off the sky bison with a single blast, leaving me to wonder why she didn't open with that. 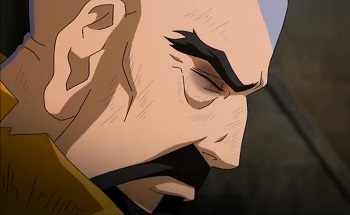 The showdown between Zaheer and Tenzin is something I didn't realize I was looking forward to, and I shared Zaheer's excitement to see how they would match up. Zaheer has spent his life studying airbending, just as Tenzin has, but only recently gained the ability. As we have seen before, Zaheer uses airbending differently and their differing styles show clearly in this fight, where the two are evenly matched. By the end of the confrontation, they even start to make similar moves, until Ming-Hua, Ghazan, and P'Li intervene. Now, terribly outmatched, Tenzin refuses to back down and is badly beaten as the camera pans away. As painful as it is to watch, the episode closes, it is revealed that Kai has survived and is able to sneak off on a young sky bison.

Legend of Korra: Book Three concludes next week with a two-episode finale. The way the season has been going, it should finish well, but I fully expect that it will not be a happy ending. Book Four was confirmed before, but considering the changes Nick has made to the show's release this season, who knows what the plans are for next. Still, these episodes were completed as the penultimate season to the series, and Book Two of ATLA ended in a dark place.

I wouldn't be surprised to see the season end with Korra surrendering to Zaheer and the Red Lotus and Book Four focusing on her escaping their influence or redeeming actions she commits to prevent some other evil by the Red Lotus. Either way, I also wouldn't be surprised to see Zaheer stick around next season. He's proven a compelling character and up until this episode, his morality has been ambiguous. Not to mention how brilliantly Henry Rollins plays the role of Zaheer; I wouldn't mind the character sticking around for Book Four