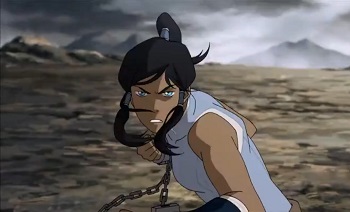 Legend of Korra: Book Three comes to a fitting end and sets up for Book Four, but how will Korra recover?

Legend of Korra: Book Three came to a close this past week with the episodes "Enter the Void" and "Venom of the Red Lotus", and the season ended with an action-packed and emotionally devastating finale.

The two-part season finale gave viewers plenty of beautiful combat sequences and character development. Admittedly, Zaheer's big, secret plan for why he wanted Korra was seriously underwhelming, but it served as an appropriate plot device to bring Korra and her friends to a new place by the end of the episodes. That place is exciting for some, especially fans of the returning Air Nation, but Korra is in a frightening state at the end. These episodes connected back to the first season in a way that might point to how Korra will be challenged in Book Four.

The finale also continued the trend in Book Three of using elements of Avatar: The Last Airbender in a definitively Legend of Korra environment. Concepts and visuals from ATLA are revisited and roles are reversed between characters as Korra finally faces Zaheer and the Red Lotus. This entire season, Korra has been restrained in some way, unable to confront the season's antagonist to her full potential. Now, we finally get to see that showdown and it is almost on the level of the fight between Aang and Fire Lord Ozai at the end of Avatar: The Last Airbender. 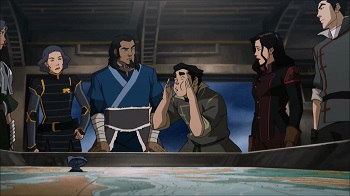 Like the Book Three finale to ATLA, the art and music in these episodes, particularly "Venom of the Red Lotus", are some of the best of the series. In fact, series co-creator Bryan Konietzko discussed the art of the finale in two posts on his personal tumblr. In one, he points out how muscular Korra looks in the episode, commenting, "THAT is how she is supposed to look in every shot." He also discusses the art and sound teams in that post and another.

Legend of Korra: Book Three was named "Change", a distinctly different naming convention from all previous seasons of Avatar and Legend of Korra. Where all previous books were named after the elements the Avatar could bend, "Water", "Earth", "Fire", "Air", and "Spirits", there is no "changebending" happening in this season. Still, things have changed. The Earth Kingdom will likely never be the same, the Air Nation is back after nearly being wiped out twice, and, most significantly, Korra is completely, radically different in the last minutes of the final episode. This change might be what brings us to the end of Book Four, and likely the end of the world of Avatar.

Legend of Korra: Book Three is available to view at Nickelodeon's website. Book One is available to watch streaming for free for Amazon Prime members, and Book Two is available for purchase through Amazon. Book Four is confirmed by the showrunners, but we aren't sure in what form the fourth season will be released.

Spoilers through the end of Legend of Korra: Book Three follow.