The finale episode of season two, episode ten ties up the remaining loose ends, but still has room for the biggest loose end of the entire series.

In the finale episode of season two, Sarah searches for Kira by infiltrating the Dyad Institute. The clones band together to try and save each other from the corporation's clutches, but Dyad isn't the only thing our group of sestras have to be worried about. 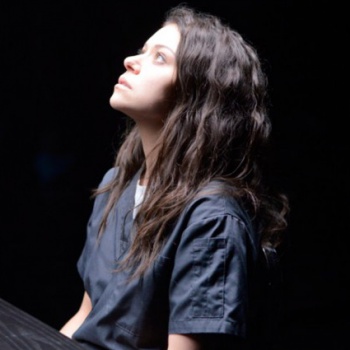 And now, the finale. This scene opens with Sarah in a dark room, being hounded by doctors who ask her invasive questions about her medical history and put her through frantic preliminary medical tests. Handcuffed and dressed in Dyad's clothing, not her own, Sarah gives her unconditional surrender to the corporation.

Presented with a contract by Dr. Nealon, a Dyad doctor who has been running tests on the clones from the beginning, Sarah pleads to see her daughter but is shot down. In contrast, Kira is getting a smaller-scale examination done in her bright, homey room at the Dyad. Perhaps street-smarts are passed down genetically because during the cheek swab, Kira swipes a cell phone from the nurse and calls unknown man who sounds suspiciously like Cal.

In Cosima's lab, the Institute confiscates Kira's bone marrow and plans to bring it directly to Dr. Nealon, Cosima's new physician, per Rachel's orders. Meanwhile, Rachel forbids Delphine contact with any clone and promptly ships her off to Frankfurt, eliminating her interference. Rachel also divulges a little nugget of information by telling Delphine that Sarah's procedure is imminent. She doesn't explain the mystery procedure nor does she give into Delphine's futile attempts to change her decision to do away with the good doctor.

While Scott tries to stop Delphine's transfer, Cosima is emailed Rachel's itinerary for the day via Delphine. Cosima makes a case to see Kira to help foster cooperation between the clones and Dyad and then is left alone with Scott. Thanks to the itinerary, the duo begin planning for Sarah's mystery procedure by using the only information they have: when Sarah and Rachel will be in the same place at the same time.

Back with Sarah, Dr. Nealon explains that Dyad's long-game is to harvest Sarah's eggs. Sarah concedes in order to see her daughter and is taken to another black, soundproof room with a two-way mirror in it. Through the mirror she can see Kira but Kira can't see her, though Kira does give the mirror a long look which implies that Kira may be aware of her mother's presence. Rachel joins Kira in the room to further twist the knife in Sarah's gut and delivers an order straight to the two-way mirror. "Even mothers have to do as they're told sometimes."

Outside the Dyad, Cal shows up at Mrs. S' house, prompted by Kira's earlier phone call for help. While Cal attempts to convince Siobhan of his good intentions, Felix receives a phone call from Detective Art Bell who has a visitor. Helena is back, eating all of Art's food, and demanding to see Sarah. Felix is sent to babysit Helena with strict orders from Mrs. S not to inform her about Sarah's whereabouts. At Art's apartment, Helena tells Art and Felix about her trip to the Prolethean ranch and though asked point-blank twice if she burned down the ranch, Helena denies any involvement with the fire.

Cal outlines his research on the Dyad for Siobhan and informs Mrs. S that he's been in contact with someone he believes to be very high up within the Institute. When he asks this nameless person for help and informs them of his company, they ask Mrs. S about Castor, though she doesn't explain who or what Castor is. Instead, a meeting is set up between Siobhan and her inside contact Paul (surprise!), back in his military role. Siobhan and Paul wait for Cal to arrive with his Dyad contact, who turns out to be Marian Bowles, the high-level Dyad contact we've seen boss around both Leekie and Rachel this season.