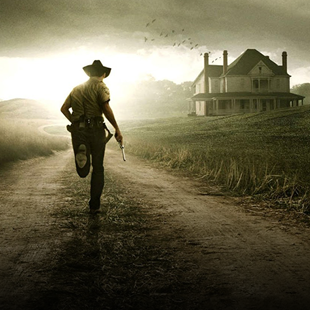 AMC's The Walking Dead is returning on Sunday, February 9th. Here's your refresher of what happened in the first half of Season 4.

Some of you probably had a few questions after The Walking Dead's mid-season finale aired back in December. Questions like "who's been leaving dead rats around the fences?" and "why did the writers waste six episodes on a silly plague that had no real effect on the main cast members, only to revive the Governor storyline just in time for the mid-season break?"

These are valid questions, but I certainly can't answer them. Luckily, The Walking Dead returns on Sunday, which means that we only have a few days to get reacquainted with our favorite characters. Except Hershel. That dude is totally dead.

Sorry. Spoiler alert. Seriously. Do not read this recap if you do not wish your Walking Dead experience to be spoiled.

The fourth season started with a classically disheveled Rick Grimes trying to regain his sanity after losing it somewhere in the middle of the third season. For Rick, things are different these days. He's traded his gun for a shovel, spending most of his time tending a small garden inside the prison yard. He's traded his wife for a daughter, and he no longer has any interest in being a fearless leader. Unfortunately, leadership is in short supply during the zombie apocalypse and Rick's hesitation only emphasizes the need.
Rick's role as a reluctant hero, instead of a mopey ghost hunter, was finally reestablished in first few episodes, which is good, because Rick has been off the rails for far too long. When The Walking Dead originally aired, he was supposed to be show's main character, but it's impossible for a sane audience to connect with a dude who spends a lot of time talking on the phone to people who don't exist.

Things are relatively peaceful around the prison until some new kid with glasses (who only lasts two episodes, so I'm not going to bother Wikipediaing his name) becomes ill with an aggressive flu strain. He eventually chokes on his own blood after everyone goes to sleep and turns into a zombified version of Rivers Cuomo.

The reason that the prison was so attractive to Rick and his team of zombie-slaying crybabies was because the fences kept the walkers out. But this sense of security quickly becomes an Achilles heel when a zombie is inside. After zombie Cuomo chows down on a few of the non-essential cast members, the flu that took his life spreads quickly. Karen, who's now dating Tyreese, becomes infected and is quarantined with David, someone we've never heard of. Hershel seems optimistic about containing the outbreak, but before anything could be done, David and Karen are mysteriously murdered and their bodies burned.

Tyreese discovers the barbecue, which eventually leads to a cathartic fist fight with Rick, because Tyreese doesn't think that people are taking Karen's death seriously. And he's right. Solving this murder mystery means investigating the other group members, and that is going to be a disaster for morale.