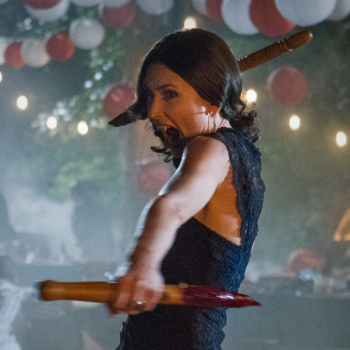 The final season of True Blood kicks off with a vampire attack and details the aftermath, but overall feels more "meh" than "aah!"

Here's a couple points to remember from season six:

This season kicks off right in the middle of the same attack that closed out season six. Infected vampires flock to Bon Temps and the aftermath of their attack leaves several characters lost and one fan favorite gone for good.

Now, onto the first episode of the final season. The episode opens on a group of vampires infected with Hepatitis V launching an attack on Bellefleur's Bar and Grill. The infected vampires attack the vampire-human pairing party at Bellefleur's and residents attempt to scatter, fight, or lie low to ride out the massacre. The attack breaks up after a mysterious whistle, leaving the vampires scattering away from the massacred townsfolk of Bon Temps. Not only did the infected vampires take Jane Bodehouse, Arlene, and Holly, but according to a vampire goo-covered Lettie Mae, one of them also killed Tara.

As the town regroups from the aftermath inside of Bellefleur's, Sam admits that his pregnant girlfriend, Nicole Wright, was also taken. Bill informs the town that the vampires will be nesting, or finding abandoned buildings where they will sleep through the oncoming day. While the town puts together a plan, Sookie listens into on the thoughts of her fellow town-mates and every single one of them, including her boyfriend Alcide, is blaming her for this attack. Meanwhile, Sam is confronted by Vince, the man Sam ran against in the Mayoral race, who has seen Sam shift into his default animal state, a border collie.

After Sam convinces Vince to keep this information under wraps for the good of the town, he finalizes a plan with Bill, Andy, and Jason. Jason and Violet, his vampire girlfriend and protector, will check the abandoned Reeves home in town while Bill and Andy will check another empty location. As Bill and Sam dismiss the townspeople to their home with their vampire escorts, Jessica's boyfriend James (now portrayed by Nathan Parsons, not Luke Grimes) is paired with Lafayette and proceeds to escort him home.

Sookie leaves the bar in a hurry and starts walking the long trip home, during which she trips and falls right next to a dead body. The body appears pale and drained of blood, but we don't linger on it long enough to see any real bite marks or other injuries.

Meanwhile, Pam is in Morocco. She and another vampire engage in a round of Russian Roulette, where the surrounding party-goers can bet on who will meet an untimely death first. Pam wins the round and in turn cashes in her reward: a clue for information on Eric's whereabouts.

Back in Bon Temps, Adilyn takes a risk and talks to Jessica. The two begin to forge a relationship despite the fact that Jessica nearly killed the half-faerie in a previous season. The two slowly start to discuss boyfriends and crushes a nondescript figure appears in the distance demanding to know what Adilyn is.

Alcide returns home to find an unharmed Sookie but the two immediately start to fight about her deciding to walk home without Alcide's protection. She promptly calls him out for the thoughts of blame he had regarding her and the fight escalates until Sookie pushes Alcide away for the night.

Jason and Violet arrive at the Reeves residence in search of the "H-vamps", but they're not alone. Vince and several other townspeople have already begun to hunt the Hep V vampires and the two groups also launch into an argument. While Jason believes that it's his job to hunt the vampires, Vince and company disagree. They believe that towns in "Small Town America" like Bon Temps are on their own and will have no help from the federal government when it comes to protection. The fight escalates but Violet manages to send the locals packing and pisses off Jason in the process. Jason's anger finally gets the better of him and he confronts Violet about this argument and adds in every annoyance he's feeling with their lifestyle. Violet, who had instituted a no-sex rule, tells Jason that she's been waiting him to tap into this angry, physical side of himself and that it was "about time" he did. The two give us the first of many sex scenes in this final season, although it sadly didn't pack the same punch as other notable scenes in True Blood history.

Lafayette returns safely home with James and the two immediately start getting high to cope with the attack and Tara's death. All and all, Lafayette seems to be handling Tara's death pretty well. He tells James that he grieved the first time Tara died, so he feels nothing the second time around. After this admission, James details some of his backstory for Lafayette and tells the man that there is no reason to feel pain, fear, guilt or regret, because it simply doesn't matter to anyone else but yourself. This nugget of wisdom resonates with Lafayette and the two exchange some interesting glances before Lafayette offers his blood to James. During James' story, he seemed to hint that he had some interest in men previously, which could make for some very interesting scenes between this duo.