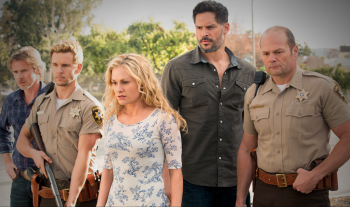 Episode two hits social commentary hard, including the debate on firearms and lack of government aid.

Here are a few key points from the aftermath of the Hepatitis V vampire attack on Bon Temps in last week's True Blood premiere:

In this episode, the townspeople of Bon Temps decide to take action against the impending vampire swarm. Meanwhile, Sookie leads an intrepid group to a nearby town on the hunt for information on Hep-V vampires. Keep up with all the final season Sundays at 9 PM ET on HBO GO.

Before we get too far into this review, I feel it's important to mention that the extended opening sequence between Eric and Jason is simultaneously hilarious and way sexier than Jason and Violet's scene from the previous episode. In this scene, Jason experiences a naughty dream featuring Eric for a full five minutes of screen time, which makes it essentially a big "You're welcome" for the fans. And I'm not mad about it.

Sookie and her Scooby Gang head to Saint Alice.
As the Bon Temps police force tries to devise a way to understand the habits of infected vampires, Sookie leads Andy, Sam, Jason, and Alcide to the dead body of a girl she found the previous night. After identifying the body, the group makes a trip to Mary-Beth Grant's hometown of Saint Alice to search for more details on the Hep-V vampires.

Upon arrival, Saint Alice isn't looking great. The town is empty and Saint Alice's buildings and streets are covered in spray-painted appeals to the government for help. After wandering around this modern-day ghost town, Sookie and company stumble upon a giant mass grave filled with the bodies of Saint Alice's residents and come to the conclusion that the infected vampires completely wiped this town before moving on to Bon Temps.

It's hard to ignore the parallels between Saint Alice's appeal to the government, which includes a shout-out to FEMA specifically, and the aftermath of Hurricane Katrina. With no federal government assistance, the towns of True Blood have begun taking matters into their own hands, including looting their own stores for supplies in order to keep themselves safe and alive. It's this kind of political undertone that I've grown to really love from True Blood, though this point feels much more blatant than anything the series has hinted at previously. Usually these kinds of larger-scale themes, like the discussion of vampires paying back taxes after "coming out of the coffin", are presented in a more nuanced manner. The representation of Saint Alice's devastation and Bon Temps' impending doom both hit you hard and since this is the final season, I actually appreciate swapping the nuance for something more direct.

But the politics don't stop there. Back in Bon Temps, the up-and-coming Big Bad Vince has turned the town against Mayor Sam Merlotte. After explaining that he saw Sam shift from a dog to a human, the town rallies behind Vince's anti-supernatural agenda and joins him on a mission to arm each other and defend Bon Temps against the infected vampires. 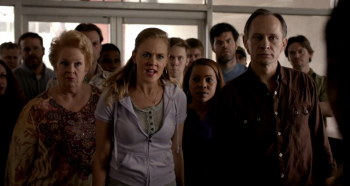 Andy's daughter Adilyn tries to warn Officer Kenya of the oncoming mob and their desire to obtain every gun available in the station, but the mob arrives before she's successful. Vince and his crew manage to convince Kenya that, thanks to the Second Amendment of the US Constitution, they have a right as American citizens to the firearms stored in the police station. Despite this ridiculous twist of the Constitution, Kenya gives in and joins the mob as they prepare for vampire warfare with a montage of dangerous gun use.

I'm disappointed in Kenya. I agree that she's been given the short end of the stick in her career, especially as she's had to play second fiddle to Jason for the past several seasons, but I always believed she upheld the law in this lawless town very well. However, under no circumstances is anyone entitled to a surplus of police firearms simply because they believe it a right. As an officer of the law, it's just a shame to see Kenya so easily manipulated into putting firearms into dangerous hands when her sworn duty is to protect and serve.

Despite the pure absurdity of the situation, it is an interesting concept to see the daily life of a group of people upended in this way. Even though Kenya is an authoritative figure, one simple turn of events has managed to strip her of any real authority she has and instead put it in the dangerous hands of Vince and his crew.