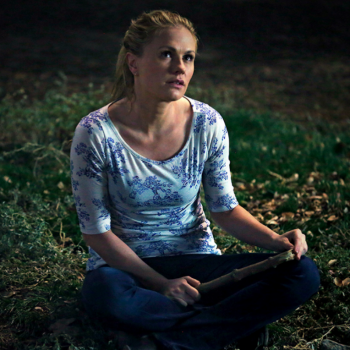 Life, death, and the meaning of it all take center stage in this episode.

In this episode, the angry mob takes action and the supernatural townspeople fight back. Pam and Eric flash us back to the 1980's and Sookie acts out another genius plan, with less than desired results.


You can watch the final season of True Blood Sundays at 9 PM ET on HBO GO.

And now, episode three: Fire in the Hole.

Bon Temps in Shambles
Upon his return from Saint Alice, Sam experiences a crisis of faith. A conversation with Reverend Daniels opens up discussion on the value of life and whether faith really matters. After seeing symbols of faith in the homes of Saint Alice, Sam is convinced that having faith is useless and can't help anyone in the long run. Rev. Daniels' advice is that a life living in anticipation of death isn't really living at all, which ultimately is the most generic advice Sam could have received.

Sam and his vampire escort Matt leave the church only to be stopped by Vince's angry mob. Poor Matt is killed instantly, leaving Sam alone with a mob full of angry, small-minded Bon Temps residents, all of whom are aware of his shapeshifter abilities and are none too happy about it. He narrowly escapes attack by shifting to an owl and fleeing the scene, leaving the mob to stand their ground.

Meanwhile, Jason and Violet are arguing again. Their relationship is physically exhausting to watch. They are always at each other's throats and their chemistry, or lack thereof, doesn't exactly make up for the fact that they're arguing 90% of the time they're on screen. In tonight's argument, Violet belittles Jason by suggesting he is not a true man because he is ruled by his emotions.

Jason's counter-argument of being a modern man, who can both think and feel, is the only shining moment of their scene. One of Jason's issues throughout the series has been fully embracing himself. Starting with the stereotypical view of a man, physically strong and emotionally distant, Jason has evolved from the "meathead" persona and now views himself as man with many facets.

The fact that Jason can now own up to being strong, thoughtful, and emotional is a big step and one I'm glad he's not backing down from, even for Violet. This helps solidify Jason Stackhouse a well-rounded character in a series that has been content to portray its characters more like caricatures.

Jason and Violet are interrupted by Andy and Jessica and recruited to join their Sookie Stackhouse search party while Adiyln and Wade take shelter at Jason's home. The group makes its way to the angry mob road block, where Maxine Fortenberry makes the big mistake of shooting Jessica in the shoulder. Violet retaliates and soon Mrs. Fortenberry is less a bunch of her internal organs.

The angry mob finally disperses, but Jessica's injury becomes a glaring loose end. The bullet wound doesn't instantly heal and although she appears to favor her arm in her later scenes, her injury is never brought up again. For the amount of pain Jessica was in when she received the injury, the bullet should have been identified as vampire-specific at the very least. As it would have taken about five seconds to give some sort of explanation to Jessica's injury, it feels like Jessica's pain was cut short so we could instead focus on the rest of the episode, including numerous Bill/Sookie scenes were nothing really happened. 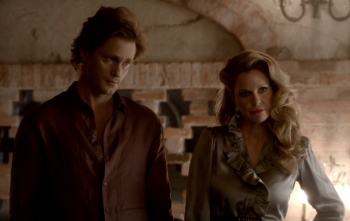 Pam and Eric Travel Back to 1986
Pam and Eric's scenes in this episode are essentially one extended flashback to France in 1986, with an emphasis on Eric's lingering humanity. As mainstreaming has yet to pass, Eric and Pam are admonished by Nan Flanagan, acting on behalf of the vampire Authority, about their lack of tact. Their public feedings and negating of their sheriff will no longer fly if they are to change the public perception of vampires. Pam takes the hint and conforms but Eric sends Nan packing, too caught up in his love for his newest human, Sylvie, to care about The Authority's rules. It's a mistake he lives with to this day, as both Pam and Sylvie's fates are soon in Eric's hands.

Sent by the Yokonomo Corporation (makers of TruBlood) and the vampire Authority, a group of assassins confronts Eric and Pam in France. They quickly drive home the point that while Eric is powerful, he is not immune to the rules, by presenting him with a choice: Pam or Sylvie. Eric was always going to pick Pam so it felt a little like wasted airtime to watch Eric's internal struggle over Sylvie or his progeny.

However, it's Eric's guilt over Sylvie's death along with the sadness felt from losing Godric and Nora that has the vampire weary of continuing his life. He's content to let the virus take him until Pam pulls out the last bit of ammunition she has: Sarah Newlin. She informs Eric that Sarah is still alive (thanks, Jason Stackhouse!) and it's this knowledge that kicks Eric back into badass mode, for now.