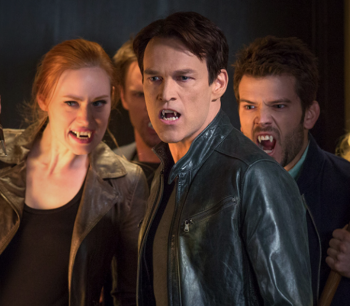 The latest episode is a history lesson, following the story of Fangtasia from conception to current events.

Here's what you missed last week on True Blood:

This week, more Pam and Eric flashbacks give us insight on the birth of the Fangtasia we know and love. Sookie rallies the troops to save Arlene, Nicole, and Jane Bodehouse which, let's just say escalates quickly.

Watch the final season of True Blood Sundays at 9 PM ET on HBO or catch episodes on demand on HBO Go.

And now, episode four: Death Is Not the End.

Notifying Next of Kin
Episode four opens up on a dual scene of Sookie and Jason notifying Jackson Herveaux and Hoyt Fortenberry, respectively, of the losses in their families. The stoic phone call between Sookie and Jackson juxtaposes with Jason and Hoyt's gut-wrenching scene. Hoyt, who was glamoured to forget everything about Jason and Jessica, has no recollection of his best friend, which only makes it more heartbreaking when Jason tries to comfort Hoyt, who only knows him as a stranger.

Jason seeks out his sister for some comfort and understanding about the tough phone call he just had to make, but Sookie immediately shoots him down. This is the first instance we see of Sookie's emotional shutdown since Alcide's death. She basically tells Jason to "man up," which furthers the central dilemma for Jason as he continues to slide on his manliness scale.

Blast from the Past
More flashbacks ensue for Eric and Pam as they trek back to Louisiana. This one picks up where the last one left off, in 1986, but Pam and Eric have been transported to Shreveport from France. There they meet the Magister, who hands down the punishment for Eric's insolence: Eric (now Sheriff of Area 5) and Pam are now proprietors of a small video rental store (family-friendly up top, adult in the basement) in the building we know as Fangtasia. Fast forward to 1996 and we get our first glimpse of Ginger, a wide-eyed vampire fan who just happens to walk into Eric and Pam's store in search of vampire cult classics. The resulting scene is a shining moment for this season, as it pays homage to and pokes fun at the plethora of 90's vampire media through Ginger's eyes. With how disappointing the rest of the season has been, these flashbacks and their tongue-in-cheek levity are quickly becoming the best scenes of the season.

Skip again to 2006, where Ginger has a plan to change the video store into a vampire club named Fangtasia. It's also a nice little feather in poor Ginger's cap that she was the brains behind the club all along, but that boon doesn't last. Pam glamours Ginger to forget her Fangtasia business model and instead takes credit for it herself, just one in the long line of glamourings Ginger has suffered through at the hands of Eric and Pam.

Sookie Takes a Stand
Throughout the episode, Sookie has not outwardly grieved for Alcide's death. She's instead made the choice to create a plan of action and stick to it at any cost, which includes a lot of tough love and a lack of empathy for the troubles of those around her. That being said, it's important to realize that these types of issues typically stem from having a female protagonist. We're essentially conditioned to expect Sookie to break down and cry over the loss of Alcide, the death of her friend Tara, and the pure hell that she's lived through this season. We're expecting to watch her become a nurturer; to coddle others in their times of need and the fact that she is acting against those societal expectations instead helps paint Sookie as a cold, unfeeling monster.

But ask yourself, would you even care about this if Sookie was a man? These questions of whether Sookie is grieving appropriately wouldn't even arise if she was male instead of female, as we aren't conditioned to expect the same reactions from a male heroes as we are of our female ones. Sookie is a character of action. It makes perfect sense for her, in times of crisis, to create a game plan and then see it through. I, for one, am happy to see her stand her ground and react in a manner that makes sense for her character instead of watching her confirm to the expectations of how a woman in her situation should react.

In Sookie's quest for answers, she leads Sam and Jason to Arlene's house. There she promises Coby and Lisa that she'll save their mother from the vampires, which is basically like saying "It can't get any worse" in a horror movie. Eager to make good on her promise, Sookie finds Holly and walks her back through the events of her capture. As soon as Sookie realizes that Fangtasia has been the holding cell all along, she leaves Andy to console Holly and heads straight to Bill's house to move on the next step of her plan.