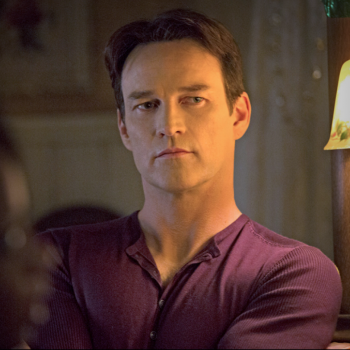 A party at the Stackhouse residence brings together humans, vampires, and all of their problems, under one roof.

This week, a party at Sookie's has the remaining humans and vampires of Bon Temps mingling, whether better or worse. Meanwhile, Pam and Eric continue to hunt down Sarah Newlin.

Watch the final season of True Blood Sundays at 9 PM ET on HBO or catch up on the season any time on HBO GO.

Now on to episode five: Lost Cause.

Pam and Eric do Dallas.
Episode five picks up with the core group cleaning Fangtasia after the H-vamp slaughter. Inside the club, Willa is rightfully pissed at Eric, who intends to use his neglected progeny for information on Sarah Newlin's whereabouts. After using her knowledge to be released from Eric as his progeny, Willa informs him that Sarah Newlin has a vampire for a sister. This is a shock considering the common story of Sarah's sister is that she vanished into thin air after becoming involved with vampires. Pam and Eric gear up for a trip to Dallas and Ginger gives what are possibly her last screams of the entire series as they ship off.

The duo hunts down Sarah's sister Amber, who is living a very normal life in Dallas albeit suffering from advanced Hep-V. She and her sister aren't on the best of terms, so Amber is instantly on board with Eric and Pam's mission to kill Sarah. She directs them to a Republican gala where Sarah plans to appeal to their parents for assistance since, you know, the Yakuza is after her head.

While Pam and Eric put on their finest in order to blend in at the gala, we see that Eric's virus has now advanced to stage two. One of the best parts of this season has been Pam and Eric's flashbacks, and their lavish costumes for the gala evoke a similar feeling despite happening in real-time. Pam, in a glittering sequin gown, and Eric, sporting a ten-gallon hat and a bolo tie, search the party for hints of Sarah, but they aren't the only party crashers at this gala. 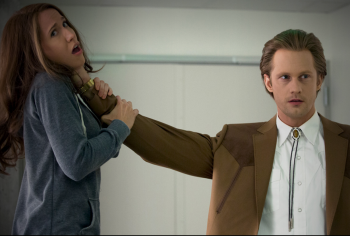 Soon, the Yakuza show up and lay waste to Dallas' wealthy elite in their search for Sarah Newlin. Sarah's attempt at escape leads her right into Eric's hands with the Yakuza hot on her trail. In Eric's final scene of the episode, he makes the choice to murder the assassins instead of Sarah.

Their deaths are bloody (one of them loses a jaw in the process), but it's obvious Eric murdered them to avenge the death of his French lover Sylvie, who died at their hands back in the 80's. The decision to end Eric's screen time without really acknowledging what happened to Sarah gives the next episode something to focus on, which will hopefully revitalize this season. At the very least, I'm sure we're in store for some retribution from Eric on behalf of the infected vampires, so ending Sarah Newlin midway through the season wouldn't make much sense anyway.

Bon Temps Brings Down the House.
After last week's episode, Sookie appears ready to mourn Alcide's death in a more traditional sense, but she's barely given that time. Instead Lafayette and James, along with Jackson Herveaux and his girlfriend Jenny, decide that the best way to celebrate Alcide's life is to have a giant party at Sookie's house. The party, like any party Lafayette hosts, has great music and top-shelf alcohol, and all of Bon Temps is present.

But not everyone is in the partying mood. Bill can't seem to focus on the fun, but rather spends the entire night lost in his memories of the pre-Civil War era. During one of these flashbacks, he calls the Southern desire to secede from the union a "lost cause," and this draws a pretty clear line between then and now, with Bon Temps' human population full of all sorts of ballyhoo at having destroyed the H-vamps. It's definitely an interesting parallel and leaves me curious as to whether anyone in Bon Temps will actually make it out alive at the end of this season, or if they are all, indeed, a lost cause.

Jessica is feeling better, but still on the track to recovery from her guilt at murdering Adilyn's sister-faeries last season. Finally she gets shaken out of her own thoughts by Andy, who forgives her for her transgressions and tells her that life is too short to keep looking backwards. With that in mind, Andy rallies his friends for assistance and proposes to Holly, who immediately says yes. Through all of this, Sookie puts on a pretty good face, but the proposal is just too much for her in the wake of a recently dead boyfriend. She sneaks upstairs with Arlene for a few moments of peace, which is smart considering that Arlene has had the most dead boyfriends of anyone in Bon Temps.