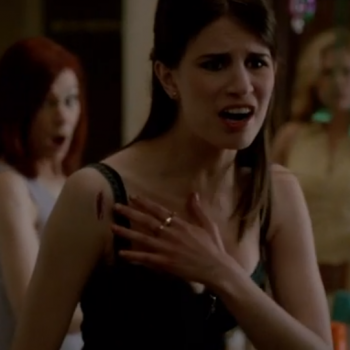 Lettie Mae, originally forbidden by Reverend Daniels to attend the party due to the sheer amount of alcohol present, takes matters into her own hands. She drugs her husband with Benedryl and arrives at the party just in time to make moving speech about Tara's death. It looks as though she's finally on the right track, up until she stabs Willa in attempt to get more of her blood so she can commune with Tara from "the other side," which was apparently her end-game all along.

Lettie Mae! Come on now! This woman is a fascinating, heart-breaking character and her scenes are some of the most unsettling in True Blood, but the emotional journey she's taking me on is exhausting. I always find myself rooting for her, hoping that she really means it this time when she says she's done with her vices, but inevitably she ends up right back in the gutter.

In all honesty, I think that Reverend Daniels was in the wrong here. Instead of trying to hide his wife away from every possible vice, perhaps he should have escorted her to the party instead. Then he could have been with her when she gave her speech about Tara and promptly brought her home after, maybe saving Willa the momentary discomfort of a kitchen knife in her shoulder and possibly giving Lettie Mae some semblance of closure. But there I go again, hoping that Lettie Mae might finally come around when in the end, she probably would have tried to stab Willa anyway. 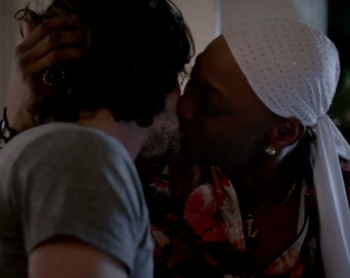 Outside the party, Lafayette and James have a heart to heart about his relationship with Jessica. It's not long until the two are making out on Sookie's porch, and in even less time they've take their flirtation one step further by having sex in the back of a car in her driveway. Jessica catches them and sends James away from the party, but Lafayette doesn't back down so easily. Instead, he calls Jessica out, confronting her about not knowing or really loving James, and finally finds the time to get a pretty important point across: he is more than a flamboyant, fabulous stereotype with the sole purpose entertaining everyone else. He informs Jessica that he deserves love too, and that if she doesn't love James she needs to let him go.

Lafayette's verbal smack-down manages to jolt Jessica out of denial, where she realizes that she's not all that interested in James after all, and it doesn't take long until she and Jason are hooking up in his childhood bedroom. Am I surprised? Not really. Jessica and Jason were sizzling on screen in seasons past, whereas Jessica and James seemed to fall flat in the wake of James' interest in Lafayette.

What's more interesting, though, is Lafayette taking a stand. This is a big step for Lafayette and incredibly important when considering depictions of race in popular media. There are numerous examples of historical media where minorities play second fiddle to the starring white leads, typically in a manner that does a disservice to both the actor and the race. As a character, Lafayette has a long history of putting people in their place.

He wouldn't put up with that kind of small-mindedness in life, so it makes sense that he wouldn't allow Jessica to run the show in this instance either. He's one of the strongest people in this series and has been through some terrible, life-changing shit (remember when he was tortured by Eric or selling V, or that time he had to kill his boyfriend Jesus?), and it's about time he exerted his place as principle character, not some sort of stereotypical comic relief.

Not Bill too!
In the classic cliffhanger ending, episode five comes to a close with Bill at home, discovering a darkened vein creeping its way up his chest.So it would seem that Bill has contracted Hep-V. It's an interesting twist to see both vampire leads now afflicted with the virus and would certainly tie into the "lost cause" theme. I hope that it'll spark some interest in the people of Bon Temps, as they've embraced Bill into their community and tend to see him as one of their own.

Maybe it'll break the town into sides again, those blindingly against infected vampires and those who see the person they knew before the infection set in. Honestly, I hope Bill's infection will just make this season something interesting to watch. So far, each episode has had one or two good moments, but has felt forced overall, which is just a huge let down for the final season of True Blood. I keep hoping that something interesting will come along and maybe now it has, with the combination of Bill's ailment and the plot shifting back to Sarah Newlin.

Best Line
Nicole: "This shit doesn't happen in other towns."