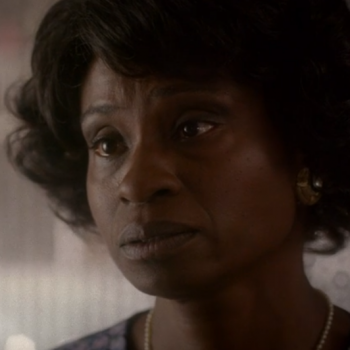 Finally, season 7 picks up with an episode that's really worth watching!

We finally have an episode worthy of True Blood's final season thanks to Lettie Mae, Sarah Newlin, and one bomb of a plot twist.

Catch the final season of True Blood Sundays at 9 PM ET on HBO or any time on HBO GO.

Communication 101
The Compton clan could definitely use some lessons in communication. Like the fantastic father-figure he is, Bill decides not to tell Jessica about his looming death and, although she overhears his admission, Jess decides not to call him out on this tactic. It's purely ridiculous that a several-hundred-year old vampire would be unable to tell his progeny of his impending doom, but I'm actually more taken aback by the fact that Jessica just let him leave the house without any sort of confrontation. As she spent most of the last season reminding Bill of his humanity, it seems strange to me that she would even entertain his bullshit right now. Maybe it's the shock of learning he was sick, but I feel like Jessica's been made to play the victim a little too much in this season and would prefer to see her step up instead of step aside.

Back at Jason's house, Deputy Stackhouse is prepared to apologize for his unfaithfulness to Violet. What he's not prepared for is Violet's Take Back Your Man plan. With lit candles and rose petals, the ambience of the scene does everything to suggest a night of romance between the estranged couple, but when Violet initiates, the awkwardness stemming from Jason's guilt is palpable. Inevitably, Jason leaves to collect his sister and bring her to the Compton residence.

Violet is none-too-pleased when Jason chooses Jessica over her yet again. In a rage, she trashes their house and leaves Jason a break-up note, but we've all seen those crazy eyes before and there's no way Violet is going to take this embarrassment lying down. Instead, she tracks down Adilyn Bellefleur and Wade Cleary, who've spent the entire episode trying to get busy despite the fact that they're soon-to-be siblings by marriage. Violet promises them a safe place where the faerie and her boyfriend can get it on outside of the prying eyes of their parents, and they accept the offer. Now, I haven't been a huge Violet fan but I'm actually excited to see what kind of havoc she creates here. With only a few more episodes left in this season, I'm hoping that Violet's wrath and unpredictability will continue to redeem this season's intensely meh episodes thus far.

Meanwhile, Jess informs Sookie and Jason about Bill's unfortunate illness. As Sookie's been the only human Bill has fed from this season, she hurries to a clinic to get tested for Hep-V. Guess what? Sookie's plan to bait the infected vampires earlier this season failed on a monumental scale, as she's now a Hep-V carrier and certainly the culprit of Bill's illness.

Bill spends his day in an attorney's waiting room, intent on updating his will to make Jessica the sole proprietor of all his assets. However, through the course of only a few hours Bill's illness has advanced rapidly from stage one to stage two. He's lethargic and dizzy and it just seems to keep getting worse. Even another vampire admits that he's never seen Hep-V act as quickly as it is in Bill. My thoughts? Sookie's faerie blood combined with Hep-V has created some sort of new, mega-strain of the virus and it's relentlessly eating its way through Bill's system. When he finally gets to see the lawyer, she notices his desperation and tries to extort him in order to move his claim to the front of the line. Thankfully the virus hasn't kicked all the badass out of Bill yet. He stabs the lawyer with her letter opener and struts out of the room, which is basically his equivalent of dropping the mic.