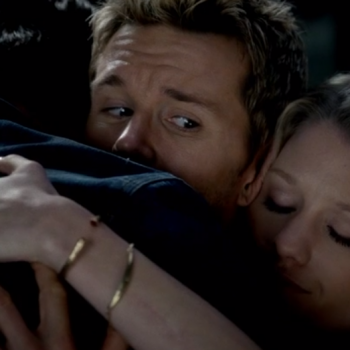 Unfortunately, one strong episode does not a good season make.

Here's what we learned on last week's True Blood:

While Eric and Pam continue to hunt Sarah Newlin, Sookie searches for a miracle. Meanwhile, Adilyn and Wade learn a lesson in trust the hard way.

We're getting close to the end here, folks. Check out the final season of True Blood Sundays at 9 PM ET on HBO or HBO GO.

Now, episode seven: May Be the Last Time.

The couple forgoes any of the numerous aids, but Violet intends to show them how versatile her toys can be. After nightfall on the second night, Violet attacks the couple, shooing Wade away like a fly and handcuffing Adilyn to the bed. Logically Violet will probably plan to drink from Adilyn, if not drain her completely. As a faerie, Adilyn is nearly irresistible to vampires but with Violet on a warpath after her betrayal from Jason, it's possible she has other plans.

Lessons in Awkwardness with Jason Stackhouse.
It's a long way from Alaska to Louisiana but Hoyt Fortenberry finally manages to show up in his hometown. With a gorgeous girlfriend in tow, Hoyt arrives first at Bellefleur's for breakfast, where he runs into Arlene. Everyone's favorite busybody notices that Hoyt doesn't seem to remember a single thing about his best friend Jason Stackhouse and decides to give the Deputy a call. Before long, Jason arrives and falls headfirst into his most awkward set of scenes yet. He joins the couple for breakfast, only after ogling Hoyt's girlfriend, but the real kicker comes when Jason finds himself in a Hoyt/Brigette sandwich hug at the morgue. This is the result of Jason explaining to Hoyt the circumstances of his mother's passing, which include Jason lying about Maxine's involvement with the angry mob and about destroying Maxine's murderer, Violet.

What is the most uncomfortable of all is the fact that these scenes had to be awkward in the first place. Any scene involving Hoyt would have been uncomfortable on Jason's end since Hoyt's memory of his best friend has been glamoured away, but tossing in the bombshell of a girlfriend for Jason to lose his cool over just feels insulting to Jason's progress as a character throughout this season.