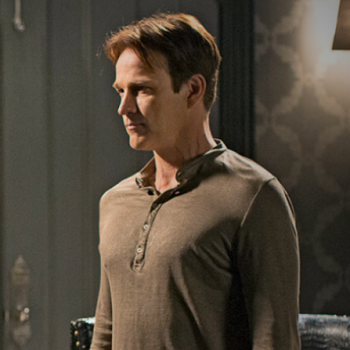 The season finale is looming, but a whole lot of nothing is (still) happening in Bon Temps.

And now Bill faces his mortality, Hoyt and Jessica grow closer, and Sookie's in danger. Again.

Episode Nine: Love Is to Die.

Life and Death in Bon Temps
Bill's refusal of the antidote has left everyone in a state of shock. He and Sookie argue (as that's about 50% of their relationship) over Bill's stubborn determination not to consume Sarah's blood. He considers dying of Hep-V to be his fate, but Sookie instead believes he's making a choice to die. Jessica, thoroughly pissed at Bill for what seems like an asinine decision to meet the true death, demands he release her as his progeny. It's interesting to watch this scene from Jessica's perspective, as it that she's banking on a release of her emotional ties to Bill along with the release from his bloodline. It's not long before she realizes that it just doesn't work that way. The fact that she still obviously cares for Bill after she's released is a real testament to the humanity she holds so dear. Reclaiming her emotions and connecting with her humanity has been a strong driver for Jessica this season, considering she pledged herself as Adilyn's protector after murdering the faerie's sisters for their blood.

After the epic fail at Fangtasia, Sookie and Jessica head to Sam's apartment and find a goodbye letter from the ex-mayor to his favorite faerie. Sam has decided to start a new life with Nicole in Chicago, away from all the insanity that Bon Temps attracts. It's supposed to feel sad, but Sam's been basically an oversight this season in the wake of both Bill and Eric's sickness so the scene doesn't really invoke a strong emotion at all. The only truly sad part of Sam's departure scene is the glance he gives Bellefleur's as he leaves town.

Not to worry, though. Arlene's taken it upon herself to breathe life back into Bon Temps starting with Bellefleur's Bar and Grill, where she's organized a big dinner for her extended family. There, Jessica and James have their awkward post-break up conversation where Jessica rightfully apologizes for treating James so poorly when they were together. It doesn't take long for Jessica to realize her heart is still with Hoyt, leading the redhead right to his house in the midst of another argument between Hoyt and Brigette.