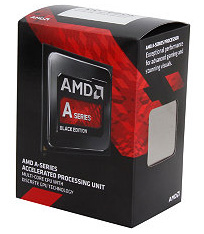 Because we're going the frugal route with this build, I'm not including a standalone video card. Instead, I chose an APU (Accelerated Processing Unit) that packs decent (for the money) graphics horsepower. The 7850K has 12 Compute Cores -- four CPU (so it's a quad-core), and eight GPU cores. The eight GPU cores have a total of 512 shader cores, while the CPU cores run between 3.7 GHz and 4 GHz, depending on which cores are on or off (or Turbo Mode, in marketing speak).

AMD's integrated graphics are solid (again, for the money), while the only Intel-based IGP worth chattering about is the Iris Pro 5200. The problem with the 5200 is that it's only available in $300-ish CPUs like the 4770R (note: I know it's also in the 4570R, but you can't buy that CPU outside of a Gigabyte barebone system at the moment). And since the speedy, capable 7850K is a penny under $170, it's a damn good value buy.

Not only is it a good value, but it's upgrade-friendly, too. Once you realize that playing video games on APU graphics is, in a word, yuck, you will go out and buy a standalone graphics card. If you buy an AMD Radeon card, this shiny new GPU will Voltron-CrossFire into a "Dual Graphics" setup with the GPU on the 7850K. In other words: CrossFire without two standalone video cards. It's not a perfect marriage - see this Tom's Hardware post for more information - but two is (usually) better than one.

But back to perspective: $170 is buying you a 2014-model speedy quad-core CPU, solid entry-level PC gaming graphics, and the foundation for a serviceable budget PC built upon AMD's latest APU architecture. Sounds pretty good, yeah? 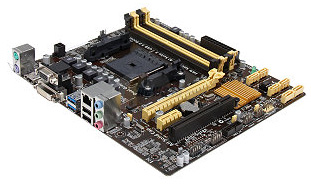 A cheap PC needs a cheap motherboard, and the A78M-A from Asus is exactly that. It's not the motherboard we want, but the one we need... Commissioner Gordon said something like that in The Dark Knight, I think.

The A78M-A is a Socket FM2+ motherboard, which means its takes our FM2+-based 7850K with no hiccups. It also takes older FM2 (no plus symbol) APUs, in case you just need a mobo upgrade.

So what the deuce does $60 get you for a motherboard? In this case, it's not bad! The A78M-A has USB 3.0 support (including a plug for front-of-the-case ports), six SATA 6 Gbps ports, and a PCI Express 3.0 slot for [lighting strike] future GPU upgrades. HDMI, DVI, and VGA are on-board for APU graphics output.

This is not an enthusiast board, but that's not possible in a $60 package. The A78M-A brings your 95W bundle of joy to life, without leaving you stuck in I/O and/or bandwidth purgatory.